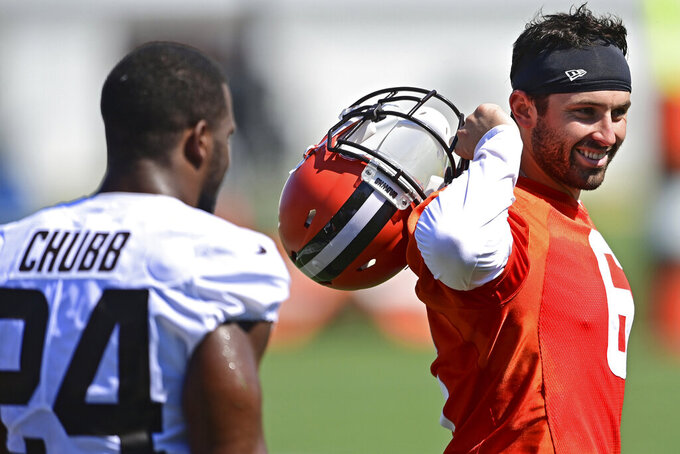 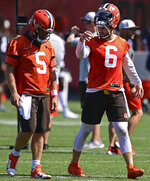 CLEVELAND (AP) — Baker Mayfield will get a summer tune-up after all.

Not wanting to risk injuries, Stefanski had kept his starting quarterback and the majority of his starters on the sideline for the team's first two preseason games.

There have been a range of methods — and opinions — across the league for playing starters in preseason games. Most teams have played their first-stringers at least a little, often giving their starting QBs a series or two.

Stefanski did not say how long Mayfield will be in the game or which other starters will see action with him.

Mayfield will likely be protected by Cleveland's starting offensive line, one of the league's best units. But Stefanski was coy about that as well.

“I’m not going to go through who’s playing, who’s not,” he said. “I gave you Baker. You’ve got to tune in Sunday night. NBC wants me to keep it a secret.”

"It is all part of it. The way you practice and the way you play is similar, and it is all good work is the way I look at it.”

Center JC Tretter was held out of team drills this week and could be one of the regulars who doesn't play. It would also be hard to imagine Stefanski putting either star running back Nick Chubb or Kareem Hunt on the field for very long — if at all.

Wide receiver Odell Beckham Jr. took his first snaps in team drills this week as he recovers from knee surgery. The Browns have been cautious with Beckham and will likely go that direction against the Falcons.

It's possible several defensive starters could play since the unit has not had much time together this summer due to injuries.

Last week, the Browns held two joint practices against the New York Giants before beating them in an exhibition game. Cleveland's first-teamers played extensively in the heated workouts with the Giants but then watched from the sideline Sunday.

NOTES: Stefanski said rookie LB Jeremiah Owusu-Koramoah will not play Sunday. He needed stitches in his forehead to close a cut following a weight-room accident this week. ... Rookie LB Tony Fields II practiced for the first time this summer. He's been slowed by two foot injuries since being drafted.