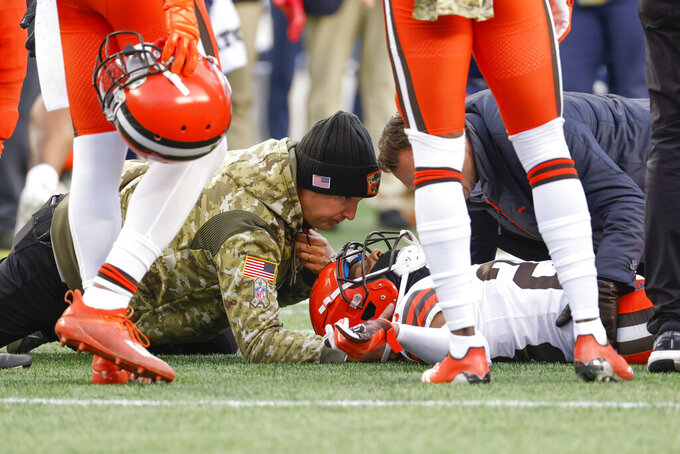 Cleveland Browns cornerback Troy Hill (23) is tended to by a medical trainer after an injury during the second half of an NFL football game against the New England Patriots, Sunday, Nov. 14, 2021, in Foxborough, Mass. Hill was released from a Boston-area hospital after being treated for a neck sprain in Sunday's 45-7 loss to the New England Patriots. A team spokesman said Hill is traveling back to Cleveland on Monday, Nov. 15 following the scary moment in the closing minutes of the blowout loss.(AP Photo/Greg M. Cooper)

Mayfield, who has been playing with a damaged left shoulder for several weeks, had to leave in the third quarter after being hit by blitzing Patriots linebacker Matthew Judon. Mayfield struggled to stand before being assessed in the sideline medical tent.

On Monday, Browns coach Kevin Stefanski didn't provide much information on Mayfield other than to say he was “feeling good about where he is.”

Stefanski said the team's medical staff has ruled out any structural damage for Mayfield.

The Browns (5-5) host the Detroit Lions (0-8-1) this week, and Stefanski was asked if it might be beneficial for Mayfield to sit out and rest.

Mayfield went 11 of 21 for just 73 yards with a touchdown and interception against the Patriots before getting hurt. In addition to having a torn labrum and fracture in his non-throwing shoulder, Mayfield has also been dealing with a sore left foot.

The Browns absorbed several injuries in Sunday’s 45-7 loss, the most severe to cornerback Troy Hill, who suffered a neck sprain and was briefly hospitalized. Hill was released and flew back from Boston to Cleveland on Monday.

Hill was injured with about four minutes left when he tried to tackle receiver Jakobi Meyers, who broke free and scored on an 11-yard catch. Hill’s facemask was removed from his helmet, he was immobilized and carried off the field on a backboard before being taken to a hospital.

The Browns said he always had movement in his extremities.

“I don’t know what exactly happened, but any time you get carted off on a stretcher, you just want to keep that guy in your prayers,” said safety John Johnson III, who played with Hill in Los Angeles before signing with Cleveland during the offseason. “He’s a great player, a great teammate, so I just hope he gets better.”

The 30-year-old Hill has been one of the few bright spots on Cleveland’s inconsistent defense. He had two sacks in the Browns’ 41-16 win over Cincinnati on Nov. 7.

Stefanski said rookie wide receiver Anthony Schwartz and cornerback A.J. Green remain in concussion protocol after getting hurt Sunday. Stefanski did not have an update on star running back Nick Chubb, who remains on the reserve/COVID-19 list.