Browns' McKinley back after absence for personal reasons 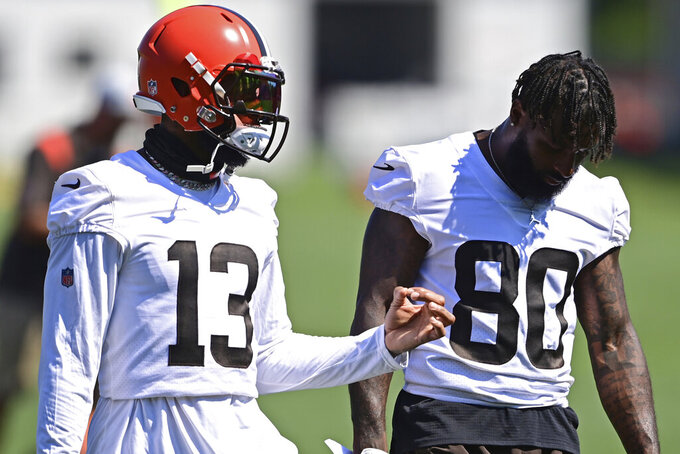 BEREA, Ohio (AP) — Takk McKinley returned after a three-week absence to the Browns, who are cautiously optimistic the defensive end has taken care of the personal issues that forced him away last month.

McKinley took part in the early walkthrough portion of practice on Tuesday. As the Browns began stretching, the 25-year-old was seen walking back into the team's training facility with a staff member.

Coach Kevin Stefanski said McKinley, who signed a one-year, $4 million free agent contract with Cleveland in March, came back a few days ago.

"He’s doing well, working through it and hopefully we’ll see more of him as we go,” Stefanski said. “He’s in a good place, ready to go.”

McKinley last practiced with the Browns on July 31, when he got ill during the afternoon workout for the second straight day. Stefanski said on Aug. 6 that McKinley was excused for personal reasons.

The Browns are hoping McKinley can add experience and depth to their revamped defense as well as back up star ends Myles Garrett and Jadeveon Clowney. McKinley seemed to be playing well early in training camp before he leaving.

Safety John Johnson III said McKinley's return was a boost to all the Browns.

"It’s awesome,” Johnson said. “He came in with me in this whole free agency class, so it was good to have our team back strong and hopefully whatever he’s dealing with is done, he can get to work. But it’s good to have him out here.”

Stefanski hasn't divulged any specifics on why the 25-year-old McKinley has been out.

“We support all of our guys, in the building, outside the building,” Stefanski said. “So he has our support, has my support and then I think the guys are excited to have him back.”

McKinley was drafted in the first round by Atlanta in 2017. He spent four seasons with the Falcons before being waived last season. He was claimed by two other teams and then was placed on injured reserve by Las Vegas after failing his physical.

McKinley was excited to come to Cleveland for a fresh start and he appeared to be in position to start opposite Garrett before the Browns signed Clowney to a one-year, $8 million contract in April.

NOTES: Browns LB Jeremiah Owusu-Koramoah needed stitches in his forehead to close a head injury sustained during a weight-lifting accident. Owusu-Koramoah was kept out of practice but Stefanski said “he's doing fine.” ... CBs Denzel Ward (leg soreness) and Greedy Williams (hamstring), S Grant Delpit (hamstring) WR Anthony Schwartz (hamstring) and LB Sione Takitaki (hamstring) were among those working on side. ... OL Nick Harris was back after missing a couple of days with a knee injury. ... K Cody Parkey was released from injured reserve after being placed there on Monday with a quadriceps injury.