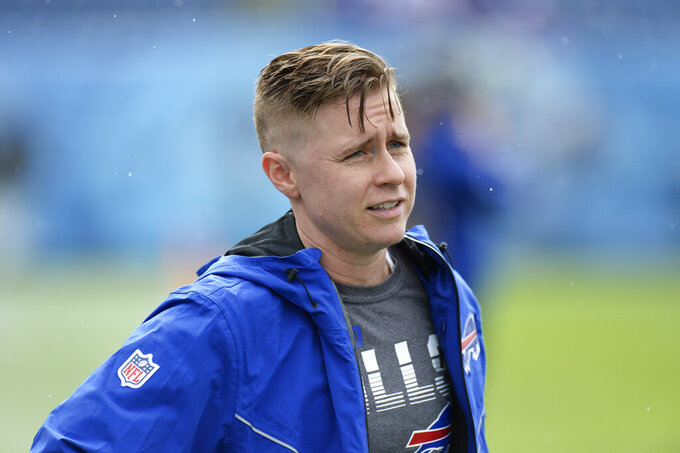 FILE - In this Oct. 6, 2019, file photo, Buffalo Bills coaching intern Callie Brownson talks with players during warmups before an NFL football game between the Bills and the Tennessee Titans in Nashville, Tenn. Brownson has been named chief of staff for new Browns coach Kevin Stefanski, who began his NFL career in a similar job. Brownson spent last season as a coaching intern with the Bills, and one of the few females in the league, which has been welcoming more women in recent years. (AP Photo/Mark Zaleski, File)

CLEVELAND (AP) — Callie Brownson has been named chief of staff for new Browns coach Kevin Stefanski, who began his NFL career in a similar job.

Brownson spent last season as a coaching intern with the Buffalo Bills, and is one of the few women in the league, which has been more welcoming to women in recent years. She's the first person to have this position in Cleveland, where her role will be much like what Stefanski did while working for coach Brad Childress in 2006 with Minnesota.

Stefanski, who was with the Vikings for 13 seasons before coming to the Browns, said the experience was invaluable and paved the way for him to become a head coach eventually.

“It's very involved in every aspect of a football operation,” Stefanski said. “Callie is uniquely situated where she can go interact with football ops or PR or the locker room or the equipment room. She's really the liaison to the rest of the building for me. I'm going to lean on her heavily and already have.”

The Browns also officially announced on Friday the hiring of former Oakland Raiders coach Bill Callahan as their new offensive line coach. Stefanski confirmed last week that Callahan was on his staff.

Callahan has been an NFL coach for 22 years and spent four seasons at Nebraska. He brings a huge wealth of knowledge to Stefanski and the Browns.

“I can't do this thing alone,” Stefanski said. “I know that, so I need really good people around me. To have somebody in the office next to me who's been a head coach in college, a head coach in the pros, has seen a lot of the obstacles that come up in the course of a day for a head coach is huge.

"I can pop in next door and ask him his opinion on a bunch of things and that can inform my decisions moving forward on things big and small.”

In Buffalo, Brownson was involved in several areas for the Bills.

“I could get my hands as dirty as I wanted to,” she said. “I was involved in the offensive side of the ball, the defensive side of the ball and I got to do a lot with the special teams. For me, not just someone who was trying to grow my resume, but grow your inner portfolio of things that I can do, that’s really what matters at the end of the day when you join a staff.

Brownson played youth football and considered playing in high school before focusing on softball. She went to George Mason and eventually found her way back to the football field, playing eight years in the Women's Football Alliance as a safety, running back and receiver.

“She's a go-getter. She's self-motivated,” Stefanski said. "She's going to put all of her energy into this gig. What's exciting for me is ultimately I want to develop young coaches. She's someone that has worked on the offensive side of the ball, worked on special teams, has a great knowledge of the game and I want to let her expand that knowledge and develop her as a head coach.”