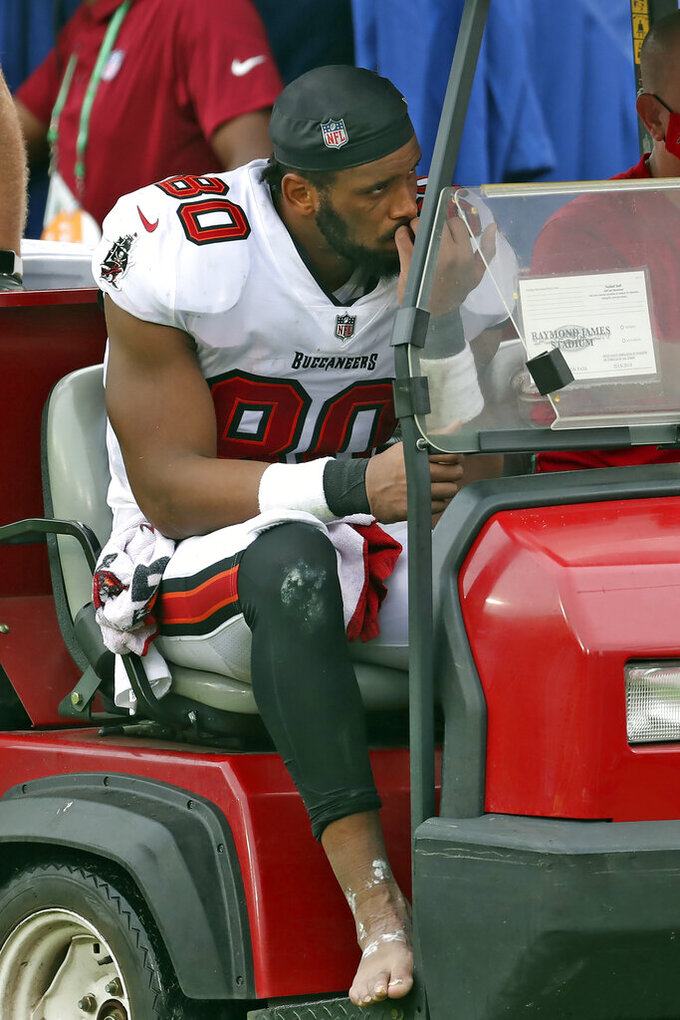 Tampa Bay Buccaneers tight end O.J. Howard (80) reacts as he leaves the field after getting injured against the Los Angeles Chargers during the second half of an NFL football game Sunday, Oct. 4, 2020, in Tampa, Fla. (AP Photo/Mark LoMoglio)

Two of the NFL's top running backs this season are facing uncertain futures after being forced to leave games early with injuries on Sunday.

Cleveland halfback Nick Chubb, who is fourth in the league in rushing entering the week, sustained a knee injury. Los Angeles Chargers back Austin Ekeler, who was eighth, was carted off with what seemed like a serious hamstring injury.

Chubb was injured in the first quarter when his right leg was rolled up on by a pair of opposing linemen engaged with each other. He limped to the locker room. Coach Kevin Stefanski said Chubb will have an MRI. He did not know the extent of the injury.

The Browns ran for 307 yards and three touchdowns despite losing Chubb.

Ekeler left a game against the Tampa Bay Buccaneers late in the first quarter after hurting his hamstring breaking a tackle in the flat. He had trouble getting into the cart on the sideline.

"The way he limped off the field it was pretty bad,” said Chargers coach Anthony Lynn, who called Ekeler a special player.

Tampa Bay’s win over the Chargers did not come without injury. Tight end O.J. Howard was lost to an Achilles tendon injury, while running backs LeSean McCoy (ankle) and Kenjon Barner (concussion) did not finish.

There were a couple of other injuries in the Browns' win over the Dallas Cowboys.

Browns receiver KhaDarel Hodge hurt his hamstring in pregame warmups and did not play. Defensive tackle Larry Ogunjobi left with an abdominal injury. The Cowboys had center Joe Looney injure his right knee on the first offensive play of the game and not return. He was replaced by rookie Tyler Biadasz.

Houston Texans tight end Jordan Akins was knocked out of a game against Minnesota with a concussion. Vikings safety Harrison Smith was ejected for a leaping helmet-to-helmet hit on the play.

The Washington Redskins saw safety Greg Stroman injure his right leg on an ill-advised punt return. He left the game.

The Carolina Panthers lost cornerback Eli Apple to a hamstring injury in their win over the Arizona Cardinals.

There were a couple of injuries in the late afternoon games, including one that appeared serious at first. Bills quarterback Josh Allen survived some scary moments as Buffalo remained undefeated with a win over Las Vegas.

Allen was taken to the locker room late in the first half with a shoulder injury. He fell awkwardly and appeared to injure himself after sprawling in the air and shoveling an 8-yard left-handed pass to Stefon Diggs. Allen was back on the bench moments later, took a knee on the final play of the half, and returned in the second half.

The Indianapolis Colts lost linebacker Darius Leonard to a groin injury in the win against Chicago. The Bears had safety Deon Bush (hamstring) exit in the second half.

The Rams' win over the Giants was relatively injury free. Giants linebacker Oshane Ximines (shoulder) and defensive back Adrian Colbert (left) left the game in the second half. Los Angeles linebacker Micah Kiser left with a groin injury in the third quarter.