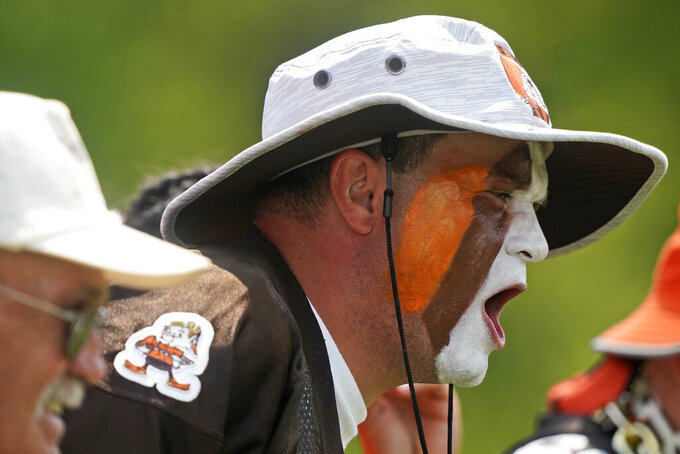 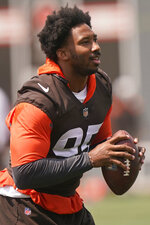 BEREA, Ohio (AP) — After so many miserable seasons, including a winless one four years ago, numerous coaching mistakes, front-office flubs and busted draft picks, Browns owners Dee and Jimmy Haslam finally have a legitimate team.

Maybe even a Super Bowl contender.

They're optimistic __ and cautious.

“Listen,” Jimmy Haslam said Saturday with a hint of warning at training camp. “With our record the previous few years, we’re realistic as to how hard it is to win in the NFL.”

But Cleveland's strong 2020, which included an 11-5 regular-season record, the team's first playoff appearance since the 2002 season and its first postseason win since 1994, has Browns fans believing their long wait for a title could be nearing an end.

“On the hoof we look good,” Jimmy Haslam said, using a term for livestock. “But it’s got to translate into wins, right?”

The Haslams covered a wide variety of topics during their annual state-of-the-team availability. They revealed that Paul DePodesta, the team's chief strategy officer credited with the Browns' turnaround, signed a five-year extension last year.

The team never announced the deal, which aligns him with the contracts given to coach Kevin Stefanski and general manager Andrew Berry. Stefanski was voted the AP's top coach last season.

DePodesta was a surprising hire in 2016 because he lacked NFL knowledge after a successful stint as a Major League Baseball executive. He settled in, got himself up to speed and was the one who led the searches that ended with Cleveland hiring Berry and Stefanski following the 2019 season.

“It lines up with the other guys,” Jimmy Haslam said. ”That makes all the sense, and we’re super-excited about that. Paul’s not the type, you don’t need to announce something on Paul’s behalf, but he’s going to be with us for a significant amount of time.”

It's comforting for the Haslams to know they've got the right people in charge with DePodesta, Berry and Stefanski. The owners' early tenure was marked by nearly constant change as they hired, fired and searched to no avail.

This is new territory for the couple, who bought the Browns from Randy Lerner in 2012. The Haslams also own the Columbus Crew of the Major Soccer League and there's been speculation they could be looking to expand their sports holdings.

“We have our hands full right now,” Dee Haslam said. “I think that’s what we’re focused on right now is with the Crew and the Browns, that’s a lot right now. That’s our focus. I don’t know what’s down the road, but that’s definitely our focus.”

There's an unmistakable buzz around the Browns, and the Haslams are thrilled that FirstEnergy Stadium will be back at 65,000 capacity this season after being limited last season due to the COVID-19 pandemic.

However, with the virus continuing to be a major issue worldwide and the delta variant leading to a surge in new cases, especially amongst the unvaccinated population, things could change quickly.

The Haslams proudly pointed out that 100% of the team's staff is vaccinated and nearly 90% of the roster.

“We watch it here and the cases are on the uptick,” Jimmy Haslam said. “I would just encourage everyone to take the vaccine, take both shots if you’ve not already because it’s important for your health and safety and it’s important for the country.”

As for the upcoming season, the Haslams are trying to stay ground amid the hype. Dee Haslam said last season was particularly stressful and she found herself pacing in the stadium hallway during games.

They've heard the Super Bowl chatter about the Browns, but know better than to listen to it.

NOTES: S Ronnie Harrison was held out of practice after injuring his hamstring Friday. ... K Cody Parkey bounced back from a rough 1 for 5 performance by going 6 for 6 as he tries to hold off Chase McLaughlin for the job. ... DE Myles Garrett and WR Odell Beckham Jr. were given planned off days. ... Defensive line coach Chris Kiffin called DT Andrew Billing “the strongest guy I’ve ever seen. He lifts up our sled – it’s like 2,000 pounds.” ... Players are off Sunday.