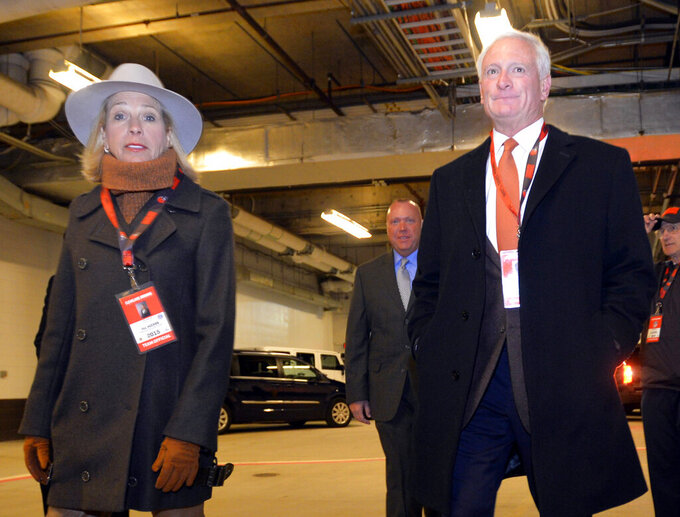 FILE - In this Nov. 30, 2015, file photo, Cleveland Browns owner Jimmy Haslam, right, and his wife Dee Haslam walk to the playing field before an NFL football game against the Baltimore Ravens in Cleveland. Browns owners Dee and Jimmy Haslam will stand in support of quarterback Baker Mayfield and any other Cleveland players who kneel during the national anthem this season. (AP Photo/David Richard, File) 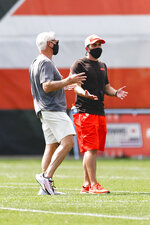 CLEVELAND (AP) — Browns owners Dee and Jimmy Haslam will stand in support of quarterback Baker Mayfield and any other Cleveland players who kneel during the national anthem this season.

Mayfield was one of the first prominent NFL players to say he intended to take a knee as a way of protesting social injustices. The 25-year-old said before Friday's first practice of training camp that he still intends to kneel and isn't concerned about any fan backlash.

“Right is right, and wrong is wrong,” he said. “There is a human rights issue that has been going on for a long time, and I believe in that.”

On Sunday, the Haslams said they have the young QB's back and respect any Browns players who join him.

“One of the great things about this country, one of the many great things, is the ability to have freedom of speech and being able to express yourself,” Jimmy Haslam said on a Zoom call with his wife. “So we are going to support our players.”

The Haslams said they are prepared for any negative blow back from anyone who sees Mayfield's actions as unpatriotic.

But while vowing to protect their young quarterback and other players, Jimmy Haslam said something is being lost in the debate over why people protest in the first place.

"Dee and I can issue some great statement, but what you all really ought to look at is what ourselves, our coaches, our players are doing the rest of the week, if you will, to make this country a better place to live, work and raise a family.”

Over the past two years, the Haslams have actively engaged with Browns players in making an impact in the Cleveland community. The team launched a social justice initiative to help area residents build stronger relationships with area police among other programs.

The Haslams understand their choice to support players kneeling may be unpopular with some fans, but they're wiling to take any heat.

Jimmy Haslam said the rhetoric is clouding any meaningful messages.

“There is just all of this condemnation from one side versus the other, rather than everybody trying to understand, ‘Well, why is that important to you, Baker? You are a thoughtful young man. You understand the ramifications,’" he said. "So we are going to be fully supportive of our players no matter what they decide to do. We just ask that, as a country, we have a lot more thoughtful dialogue.”

Dee Haslam praised Browns first-year general manager Andrew Berry for starting his Be The Solution campaign, which he created in the aftermath of George Floyd's death and protests across the U.S. this summer as a way for people to make meaningful change.

“The biggest part of that was listen and learn,” she said. "Listen to each other instead of just throwing somebody under the bus for not wanting to lead the way you want to. That is what makes our country great. We can be different, have different beliefs and be respectful about that.

"Somewhere along the line, we completely lost that respect and the civil discourse, it is gone. Hopefully, we can get that back and maybe we can be an example of that.”

During their 25-minute call with reporters, the Haslams expressed hope that Cleveland fans will be allowed to attend games at FirstEnergy Stadium. They've been working with a state task force on the possibility and would like to get 20% capacity in the 65,000-seat facility.

Ultimately, the decision will be made by Ohio Gov. Mike DeWine.

“It is not our call about how many fans we have in the stands on Sunday or if we have fans in the stands,” said Jimmy Haslam, whose brother, Bill, was Tennessee's governor from 2011-19. "We want it to happen for our players and for those fans.”