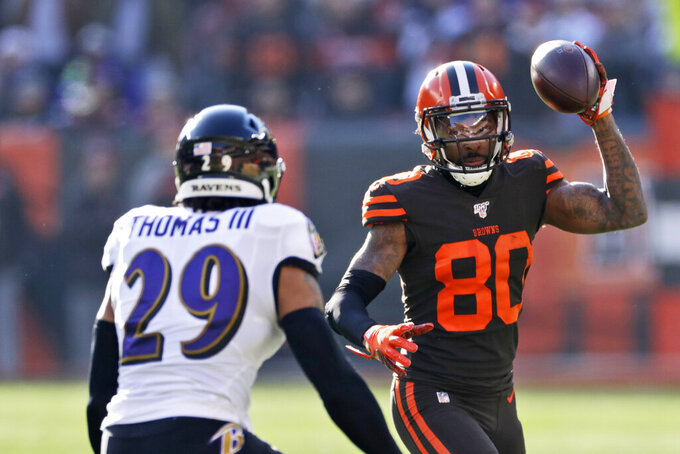 FILE - In this Dec. 22. 2019, file photo, Cleveland Browns wide receiver Jarvis Landry (80) tries to avoid Baltimore Ravens free safety Earl Thomas (29) during the first half of an NFL football game in Cleveland. Landry has been placed on the active/physically unable to perform list following offseason hip surgery. The team made the roster move Sunday, Aug. 2, 2020, while stressing that Landry remains on schedule to return this season. (AP Photo/Ron Schwane, File)

The team made the roster move Sunday while stressing that Landry remains on schedule to return this season. Landry, who has not missed a game during six NFL seasons with Miami and Cleveland, has said he expects to be back on the field sometime in August.

On Thursday, first-year coach Kevin Stefanski said Landry was still on track "based on everything he has done post-surgery.”

The 27-year-old had surgery in February. Landry played through a painful condition last season, when he finished with 83 receptions for 1,174 yards and six touchdowns.

A four-time Pro Bowler, Landry has made at least 81 catches per season and he has twice recorded more than 100.

Cleveland's veterans have been reporting to training camp this week and going through COVID-19 testing and taking physicals.