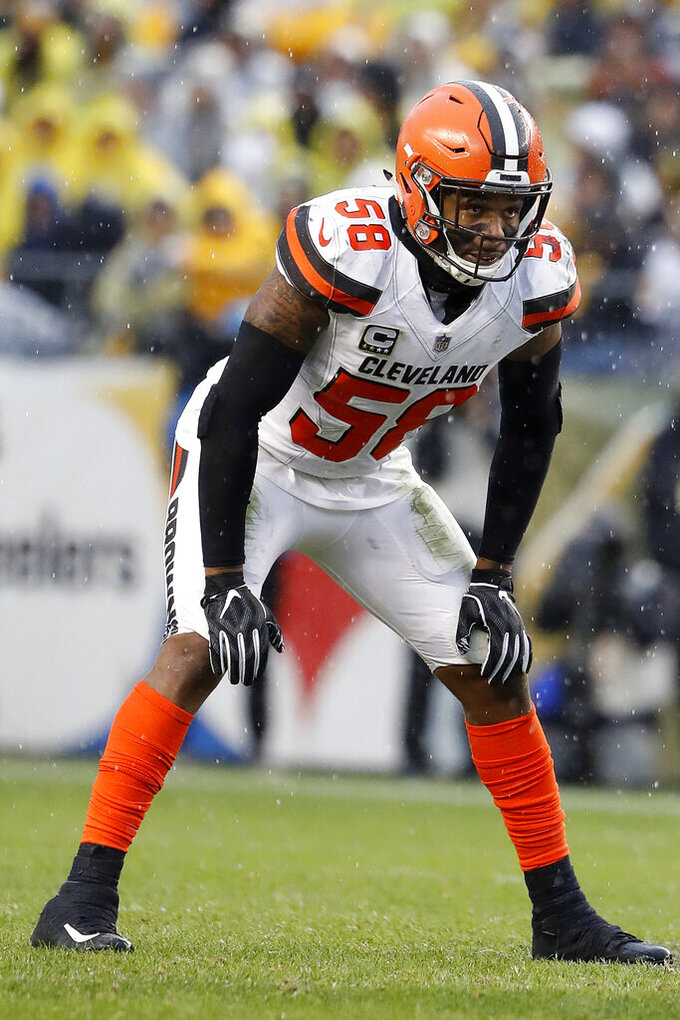 CLEVELAND (AP) — Christian Kirksey's season is already looking a lot like his 2018.

The Browns placed their linebacker and defensive captain on injured reserve Saturday, a move that will sideline him for at least eight games. Kirksey missed the final seven games last season after he was put on IR with a hamstring injury.

Kirksey's loss is another shot to the Browns (1-1), who placed starting tight end David Njoku on IR with a broken right wrist on Friday. Cleveland could also be down several more starters — and maybe its entire secondary — for Sunday night's game against the high-powered Los Angeles Rams.

Kirksey is believed to have suffered a torn pectoral muscle during the second half of Monday night's 23-3 win over the New York Jets. It's still possible he'll have season-ending surgery.

A leader and well-respected player in Cleveland's locker room, Kirksey will be replaced in the starting lineup by rookie linebacker Mack Wilson. The Browns' fifth-round pick from Alabama got some playing time against the Jets after Kirksey got hurt.

"Mack did well," coach Freddie Kitchens said. "I do not know what he recorded stat wise, but I think he had 11 or 12 plays and four tackles or something like that."

With Kirksey out and linebacker Adarius Taylor questionable with an ankle injury, the Browns promoted undrafted rookie linebacker Willie Harvey from the practice squad to the active roster.

NOTES: The Browns also re-signed running back Elijah McGuire to the practice squad. ... The NFL fined DE Myles Garrett $21,056 each for two roughing calls Monday night. Garrett leads the league with five sacks, but he's been called for five penalties. He was also fined $10,527 for a personal foul in the opener. ... Wilson was fined $28,075 for leading with his helmet against the Jets.