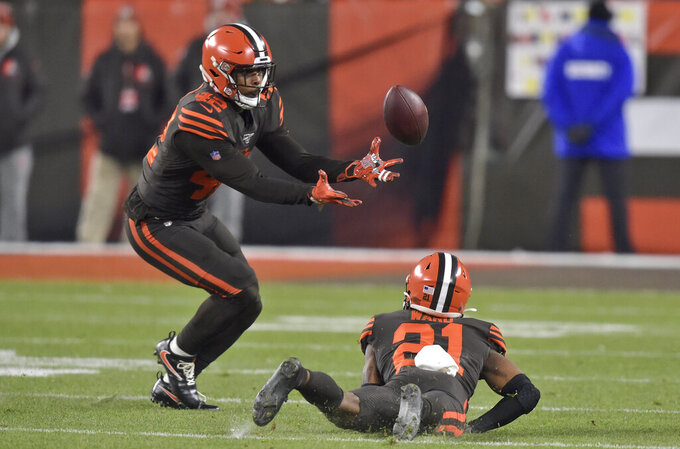 Cleveland Browns strong safety Morgan Burnett (42) catches an interception during the first half of the team's NFL football game against the Pittsburgh Steelers, Thursday, Nov. 14, 2019, in Cleveland. (AP Photo/David Richard)

CLEVELAND (AP) — The Browns have placed starting safety Morgan Burnett on injured reserve with a torn Achilles tendon, another setback for Cleveland’s defense.

Burnett got hurt during Thursday night’s victory over Pittsburgh. He had five tackles and an interception against one of his former teams before leaving in the second quarter.

The loss of Burnett complicates things for the Browns, who could be without star defensive end Myles Garrett for the remainder of the season following his indefinite suspension for hitting Pittsburgh quarterback Mason Rudolph with a helmet.

The Browns may also be missing defensive tackle Larry Ogunjobi, who was suspended one game for shoving Rudolph.

Rookie safety Sheldrick Redwine could get more playing time now that Burnett’s season is over. The fourth-round pick out of Miami was on the field for 33 plays against the Steelers.

Tight end David Njoku could fill the open roster spot. He’s eligible to play this week after being out since Week 2 with a broken wrist.