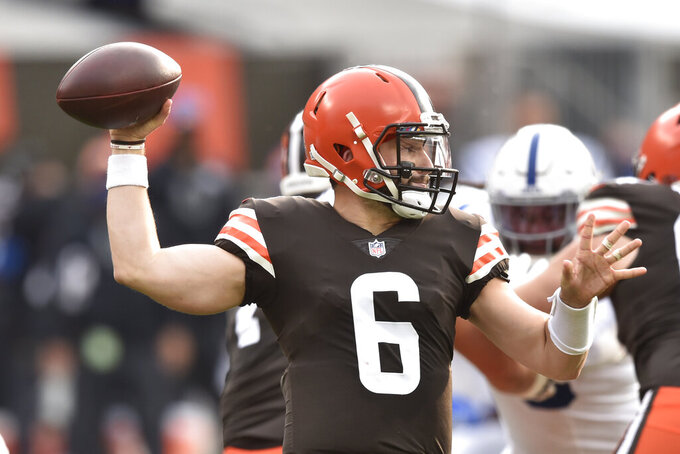 Cleveland Browns quarterback Baker Mayfield throws during the first half of an NFL football game against the Indianapolis Colts, Sunday, Oct. 11, 2020, in Cleveland. (AP Photo/David Richard)

Mayfield said his entire right side remains tender after he took a big hit in the fourth quarter of Sunday's win over the Indianapolis Colts. Mayfield said he's confident he'll be ready for this week's AFC North matchup between the Browns (4-1) and Steelers (4-0).

For now, Browns coach Kevin Stefanski said Mayfield will be held out of some drills and the team will evaluate him daily.

“He's sore today and we'll see how he is tomorrow,” Stefanski said.

Case Keenum is Cleveland’s No. 2 quarterback.

Mayfield needed X-rays following the win over the Colts. He also complained about taking a hit on his wrist, but said that's not an issue.

The 2018 No. 1 overall draft pick has been playing well this season, but he struggled in the second half against the Colts, completing 2 of 9 passes while throwing two interceptions. Mayfield threw two touchdown passes in the first half against Indy's defense, which was ranked first overall going into the game.

The Browns, 4-1 for the first time since 1994, have lost 16 straight games at Pittsburgh's Heinz Field.