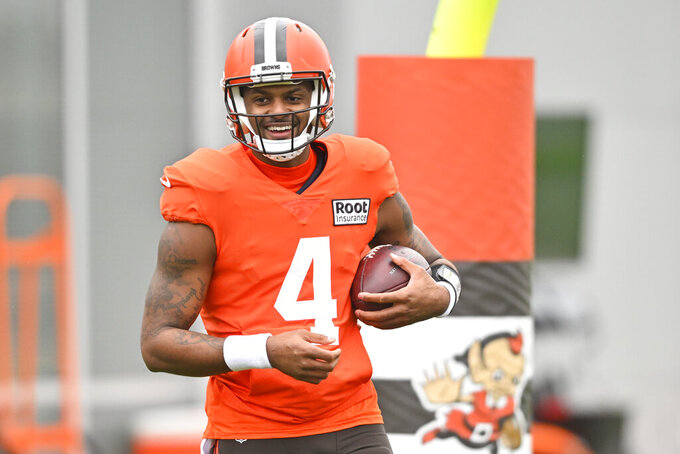 BEREA, Ohio (AP) — Deshaun Watson whipped a short pass, pulled down on the face mask of his helmet and ducked his head before running across the field while trailing starter Jacoby Brissett and Cleveland's other quarterbacks.

He is catching up.

Still suspended, Watson is back on the field.

More than two months after he began serving an 11-game NFL suspension for sexual misconduct allegations, Watson practiced Wednesday in what he and the Browns hope is the next step in him taking over as their franchise QB.

It was Watson's first on-field team workout since Aug. 30, 12 days after the three-time Pro Bowler reached a settlement with the league following accusation by more than two dozen women of sexually inappropriate behavior during massage therapy sessions in Texas.

Watson, who was acquired in a trade from Houston in March, agreed to the ban, to pay a $5 million fine and to undergo treatment and counseling after the league ruled he had violated its personal conduct policy.

Despite temperatures hovering around freezing, Watson wore an orange, short-sleeved No. 4 jersey with matching socks during the 25-minute portion of practice open to reporters. He tucked his hands into a warmer wrapped around his waist in between firing passes to Cleveland’s wide receiver.

Watson did not speak to the media. He was cordial while getting ready in the locker room before practice and chuckled about the “chilly” weather that welcomed him back.

As long as he continues to meet the provisions of his settlement, Watson will play his first regular-season game in 700 days on Dec. 4 when the Browns visit Houston. The Texans drafted him in 2017 before he demanded a trade and was eventually dealt to Cleveland for a slew of draft picks, including three first-rounders.

The Browns then signed Watson to a five-year, fully guaranteed $230 million contract, the richest in league history.

Coach Kevin Stefanski would not reveal any specifics about plans to get Watson ready to play in two weeks while also preparing Brissett for this Sunday's game at Buffalo.

“This is the next step for him, and it's good to have him back out on the field," Stefanski said. "What's important is that we do everything we can to find a way to get a win versus Buffalo. That is where the players’ focus is.”

Watson took the majority of snaps with Cleveland’s starting offense in training camp and started the Browns’ exhibition opener at Jacksonville before his suspension kicked in. He was banned from the team’s facility until mid-October, when he was allowed to attend meetings and work out.

Brissett will start two more games before handing Cleveland's offense over to Watson.

Although the transition will be unusual, especially because Brissett has played better than expectations and become a respected leader in the locker room, Stefanski isn't worried about any awkwardness.

“You guys know the two parties at hand here,” Stefanski said. “These are professionals. These are good people. They're friends. I think that is probably the most important thing.”

Brissett quickly dismissed a question about getting his share of snaps.

“That’s not my job to balance it,” he said. “It’s coach’s job to balance how he splits things up. I just have to go out there and prepare like I always prepare. Do my job and then control what I can control."

Like Stefanski, running back Nick Chubb believes the impending QB changeover will be seamless.

"Jacoby’s our quarterback. He has been since the beginning of the season. So it won’t be awkward at all,” he said. “But we’re also excited to see Deshaun come out and get some reps and see how he’s doing.”

The 27-year-old Watson tried to keep his skills sharp by working with a private quarterback coach during the first month of his suspension. Until this week, Cleveland's coaches had not been allowed to instruct him.

There's going to be rust, and Brissett joked that he would assess Watson's game accordingly.

“We'll see,” Brissett said when asked if it was good to have Watson back. "If it's bad, we'll tell him to stay in for the rest of the year.”

Before his suspension, Watson reached financial settlements with 23 of 24 civil lawsuits filed against him. Another lawsuit was dropped by the plaintiff after she was ordered by a judge to amend her name.

NOTES: With a blizzard in the forecast, the Browns have discussed other travel options to Buffalo. They're currently scheduled to fly on Saturday. ... LB Jeremiah Owusu-Koramoah (knee) practiced after missing his second straight game. RG Wyatt Teller (calf) also returned. He left in the first quarter at Miami. ... TE David Njoku (ankle) worked on the side. He's missed the past two games.