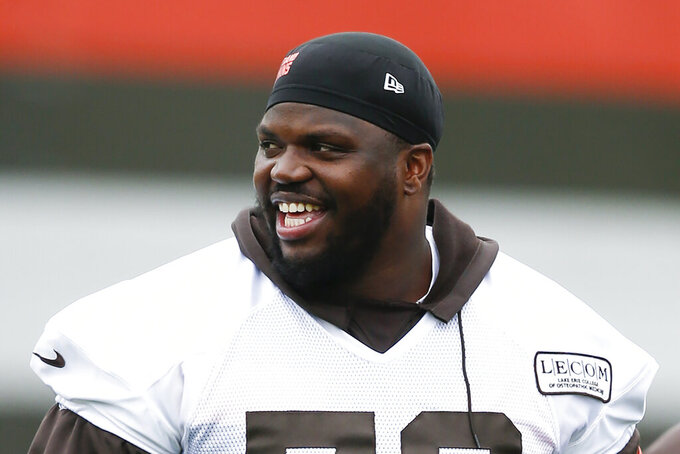 FILE - In this May 22, 2019, file photo, Cleveland Browns' Greg Robinson walks off the field during an NFL football organized team activity session at the team's training facility in Berea, Ohio. Browns starting left tackle Greg Robinson has re-signed with the team Monday, Sept. 2, 2019, a day after his contract was surprisingly terminated. (AP Photo/Ron Schwane, File)

BEREA, Ohio (AP) — Browns starting left tackle Greg Robinson has re-signed with the team, a day after his contract was surprisingly terminated.

Robinson was cut Sunday, when the Browns had to open a roster spot to make rookie offensive lineman Drew Forbes eligible to return from the injured list later this season. Forbes sustained a knee injury in Thursday's exhibition against Detroit.

The team's move with Robinson raised some eyebrows, but was more procedural than anything. The 26-year-old could have signed elsewhere, but wanted to stay with the Browns.

Cleveland did not announce the transaction with others.

The No. 2 overall pick in the 2014 draft, Robinson settled in as Cleveland's starter and played the final eight games last season. The Browns signed him to a one-year, $7 million contract in February.

Robinson will protect quarterback Baker Mayfield's blindside when the Browns open the season Sunday against Tennessee.