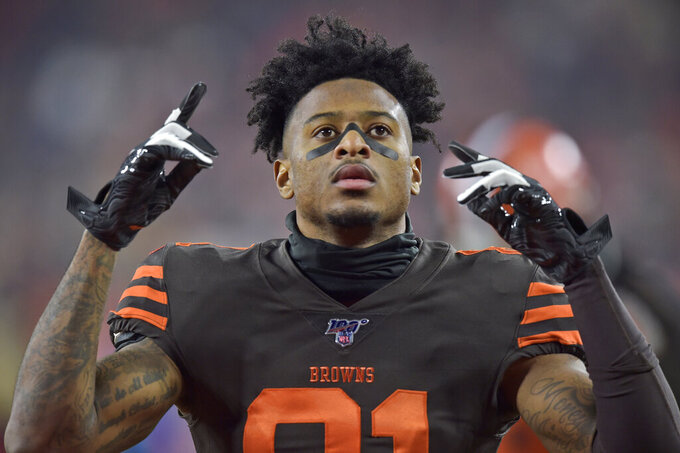 FILE - In this Nov. 14, 2019, file photo, Cleveland Browns wide receiver Rashard Higgins gestures before an NFL football game against the Pittsburgh Steelers in Cleveland. Higgins has agreed to a one-year contract to stay with the Cleveland Browns, a person familiar with the agreement told The Associated Press on Tuesday, April 28, 2020. (AP Photo/David Richard, File)

CLEVELAND (AP) — Rashard Higgins is back on Cleveland's roster. It remains to be seen if he's back in the game plan.

Higgins' signing to a one-year, $910,000 contract was made official Friday by the Browns, who brought back the free agent following a strange 2019 season for the former fifth-round draft pick.

Higgins was limited by a knee injury last season, but he also fell from favor with former coach Freddie Kitchens and finished with four catches for 55 yards. It was a dramatic drop for Higgins, who in 2018 became a favorite target for quarterback Baker Mayfield and had 39 receptions for 572 yards and four touchdowns.

The 25-year-old Higgins is the longest tenured receiver with Cleveland. He'll compete for the No. 3 receiver spot behind Jarvis Landry and Odell Beckham Jr. along with rookie Donovan Peoples-Jones and others.

In four seasons, Higgins has 76 catches for 1,016 yards and seven touchdowns.