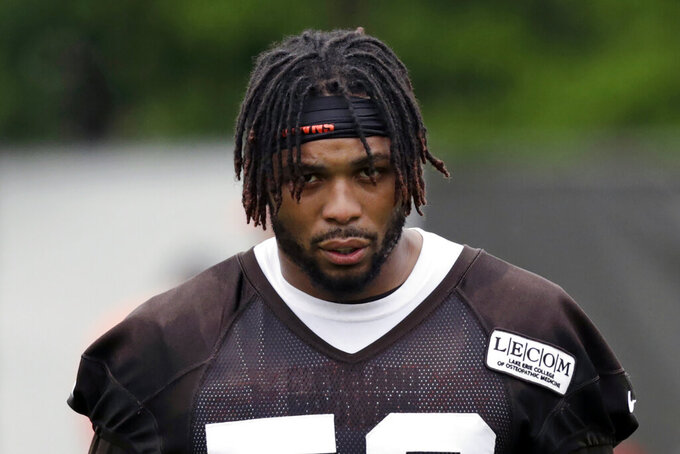 FILE - In this May 30, 2019, file photo, Cleveland Browns outside linebacker Christian Kirksey walks off the field after an NFL football organized team activity session at the team's training facility in Berea, Ohio. The Browns on Tuesday, March 10, 2020, released linebacker Christian Kirksey, a veteran who left his mark on the field and throughout the community during his six seasons in Cleveland. (AP Photo/Tony Dejak, File)

CLEVELAND (AP) — Christian Kirksey's value to the Browns — on and off the field — didn't equal what they would have to pay the veteran linebacker.

Cleveland released Kirksey on Tuesday after failing to restructure his contract. The 27-year-old Kirksey, a team leader and one of the Browns' most enthusiastic players, was due to make $7.75 million in base salary this season and $8.25 million in 2021.

His release will save the Browns roughly $7 million in salary-cap space as the team prepares for NFL free agency next week.

A third-round draft pick in 2014 from Iowa, Kirksey made 54 starts with Cleveland and appeared in 73 games. However, he couldn't stay healthy the past two seasons as he was limited to just nine games after not missing any time in his first four seasons as a pro.

Kirksey played in only nine games in 2018 because of a hamstring injury, and he was placed on injured reserve after Week 2 last season because of a torn pectoral muscle sustained while trying to make a tackle against the New York Jets. Rookie Mack Wilson moved into Kirksey's spot for 14 games.

Kirksey thanked the Browns, their fans and owners Dee and Jimmy Haslam with a posting on his Twitter account.

“FOREVER GRATEFUL! Thank you Cleveland for the amazing years!” Kirksey wrote. “Thank you to the entire organization, my teammates, the Haslems for giving me an opportunity of a lifetime and most of all thank you to the city of Cleveland for accepting me as their own! Forever Love, Kirkoland Out!”

The move is somewhat surprising because the Browns are not expected to re-sign free agent linebacker Joe Schobert, who stepped up last year after Kirksey got hurt.

“Christian Kirksey has been a vital member of our organization for the last six seasons because of his contributions on and off the field,” said Browns executive vice president and general manager Andrew Berry. “He has been a strong leader both in our locker room and in the Cleveland community. These are difficult decisions and, in Christian’s case, more challenging because of how well he has represented our team."

Kirksey was active in the Cleveland community, taking a major role in the team's social justice efforts. Kirksey was voted the team's Good Guy in 2016 by local football writers and he was the team's 2018 Walter Payton Man of the Year.