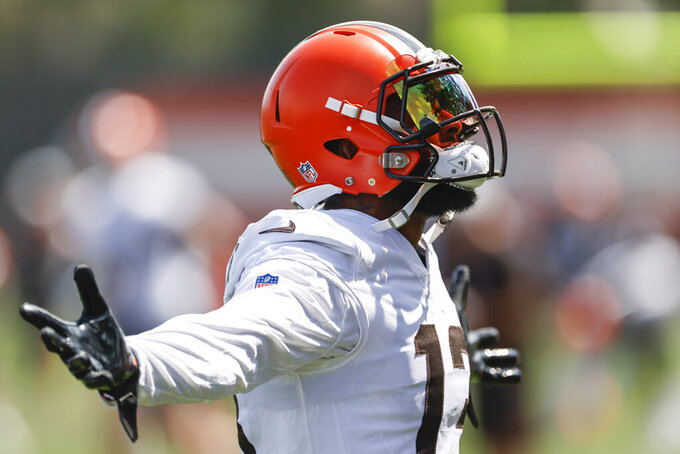 BEREA, Ohio (AP) — The more established, talented NFL teams have the luxury of resting their starters during the exhibition season.

The Browns are finally one of them.

Coach Kevin Stefanski said Thursday he'll sit the “majority” of his starters, including quarterback Baker Mayfield, for Saturday's preseason opener against Jacksonville in Urban Meyer's coaching debut with the Jaguars.

It's a big change for the Browns, who in past summers needed all the snaps they could get to prepare for the regular season.

But after ending its long playoff drought last season and winning its first postseason game since 1994, Cleveland has high expectations in 2021 and Stefanksi can be more selective with playing time — while not putting anyone at added injury risk.

Stefanski wouldn't say if his starters will play at all in the preseason, which has been reduced by the league from a traditional four-game schedule to three this season.

"We will address that when appropriate,” said Stefanski, voted the AP's coach of the year in his first season. “The focus is on this game for right now.”

The COVID-19 pandemic led to the preseason being canceled a year ago, causing teams to re-evaluate the need to get their starters on the field for Week 1. The addition of a 17th regular-season game game is another adjustment.

“You take it all into account,” Stefanski said. "You take what you learned last year, you take the extra game and you take your players. As we talk about what we are going to do as a team and talk about our plan with the coaches, we are just going to do what we think is right for the Cleveland Browns and specifically what is right for each player.

"That is how we will approach really all of our decisions.”

Backup QB Case Keenum will start in place of Mayfield, who led the Browns to a 12-6 record and win over Pittsburgh in the wild-card round last season.

Stefanski didn't identify which starters will play, but he said all the healthy rookies, including cornerback Greg Newsome II, the team's first-round draft pick, and linebacker Jeremiah Owusu-Koramoah will see action.

Stefanski added that cornerback Greedy Williams and offensive lineman Chris Hubbard are also scheduled to play. Williams missed all of 2020 with a shoulder nerve injury, and Hubbard underwent knee surgery in December.

“We have a plan for everybody to be smart about it, but the plan is for them to play,” Stefanski said. “We will see how we come out of the next couple of days and see if that is something that we can do come Saturday night.”

Like some other teams, the Browns have had a large number of soft-tissue injuries during camp. Star defensive end Myles Garrett was among a group of seven players sidelined Thursday by hamstring issues.

Stefanski doesn't think the number is inordinate and said it's due to the innate skills required to play football.

“You can train quite a bit and be in great shape, but then all of the sudden, the ball is in the air and you have to burst for it,” he said. “It is something that we spend a lot of time on trying to prevent. I would love to tell you that we could prevent all of them. I don't think that is realistic.”

NOTES: Mayfield and Odell Beckham Jr. had fun filling in on defense late in practice on a sweltering afternoon. ... Stefanski said even those not playing will make the trip to Florida. ... TE Austin Hooper, who has had a rough few days of late, made a nice TD catch on a pass from Mayfield. ... Stefanski has been impressed with rookie WR/RB Demetric Felton, a seventh-round pick from UCLA. Felton said he doesn't have a favorite position, but that he prefers getting the ball and making plays. “No shock,” Stefanski said. "But he is a really competitive kid.”