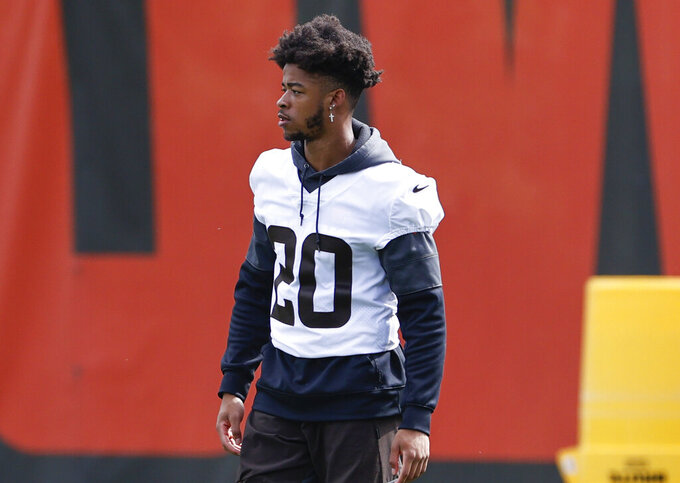 Cleveland Browns cornerback Greg Newsome II warms up during an NFL football practice at the team's training facility Wednesday, June 9, 2021, in Berea, Ohio. Newsome, a first-round pick who could be a starter this season, signed his contract Saturday, July 24. (AP Photo/Ron Schwane)

Rookie wide receiver Anthony Schwartz also signed. The third-round pick from Auburn has Olympic-level sprinter speed and could get a chance to return kickoffs.

Newsome and Schwartz had been the only unsigned members of Cleveland’s eight-player 2021 draft class.

Newsome's deal is worth $12.7 million and includes a $6.6 million signing bonus. The Northwestern star signed as the team's first-year players and quarterbacks reported to training camp in Berea.

The Browns zeroed in on Newsome as the cornerback they wanted from a strong group of prospects and selected him 26th overall. Newsome was one of the top coverage cornerbacks in the Big Ten, leading the conference in passes defensed.

He'll compete this summer with Greedy Williams for a starting job opposite Denzel Ward, a former first-round pick who has become one of the top defensive backs in the AFC.

Williams, drafted in the second round in 2019, missed all of last season with a shoulder nerve injury that will be tested by contact in camp.

Schwartz will give the Browns depth at wide receiver and his blazing speed could help him get on the field in his first season. He had 117 catches for 1,433 yards and six touchdowns in 36 games for Auburn.