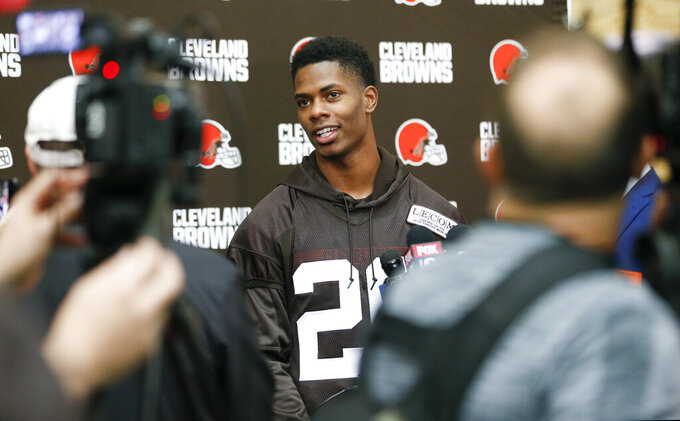 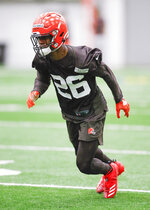 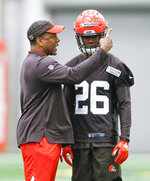 He's a dead ringer for the comedian.

The only rock the Browns need him to be is in their secondary.

After questions about his toughness and tackling dropped him to the second round of last week's NFL draft, Williams was selected by Cleveland, which traded up three spots to nab the former LSU standout. The Browns hope that pairing him with Denzel Ward, who made the Pro Bowl last season as a rookie, will stabilize their defensive backfield for years.

If first impressions mean anything, Williams made a strong one Friday as the Browns opened their rookie minicamp to the media.

Wearing No. 26, Williams was relaxed while answering some pointed questions, and then showed off some of his quickness and athleticism during a workout moved indoors by rain.

One of the SEC's best defensive backs, Williams was so confident he'd be taken in the first round that he went to Nashville for the draft with much of his family, including his fiancee and 2-year-old daughter.

But as the night wore on, and without hearing his name announced by Commissioner Roger Goodell, Williams grew uneasy. He began to wonder and worry.

Williams asked LSU teammate Devin White to fill him in on draft protocol.

Once the first round ended, Williams knew there was only one thing to do — pack up.

Williams was surrounded by 150 guests at a Holiday Inn in Shreveport, Louisiana, when the call came through from Browns general manager John Dorsey.

"It was probably one of the best experiences of my life," he said.

Once Dorsey welcomed Williams, he handed the phone to coach Freddie Kitchens, who had a different message for the cornerback. The team posted the exchange on Twitter.

"You're going to have to tackle a little bit now," Kitchens said with a laugh. "You know that, right?"

Williams understand the criticism on him entering the draft was his tackling, or lack thereof, and that may have caused him to slip.

He's not worried about it being a problem going forward.

"I saw John Dorsey said we just need this guy to get somebody down and that's me. I'm more than just getting somebody down," he said. "I'm like tackling, hitting, whatever they need me to do, and I'm here to do it."

First, there was another issue to tackle — Williams' boast that the Browns will play in the Super Bowl this season.

Caught up in the excitement moments after being drafted, Williams made the bold prediction three times during a conference call with reporters.

When he arrived in Cleveland, Williams met with Kitchens, who warned him to be more careful with his words.

NOTES: The Browns signed 15 undrafted free agents, including Scottish punter Jamie Gillan. Nicknamed "The Scottish Hammer," Gillan, who played at Arkansas-Pine Bluff, is expected to compete with Britton Colquitt. ... Kitchens had several former Browns players, including Hall of Famer Jim Brown and Bernie Kosar, speak to the rookies Thursday night. "I wanted them to see what it was to be a Cleveland Brown and what it meant to the city," Kitchens said. "It went really well."