Browns set to interview McDaniels, others for coaching job 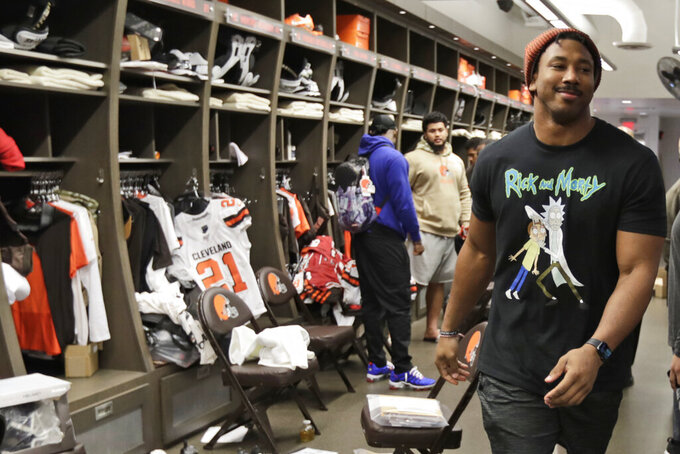 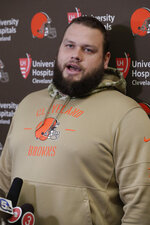 BEREA, Ohio (AP) — Jarvis Landry believes he knows what the Browns are missing more than anything else.

A day after their season of great expectations ended in bitter disappointment, failure and another year out of the playoffs, the Browns began their search for a new coach to replace Freddie Kitchens, who was fired after going 6-10 and being unable to get Cleveland's talented roster to bond.

It's a familiar place for the Browns. If there's one thing they know how to do, it's look for a coach. The trouble has been finding the right one.

Shortly after Kitchens was dismissed and was spotted leaving the Browns' headquarters carrying his belongings and an orange helmet, the team embarked on its coaching search by asking permission to speak with New England offensive coordinator Josh McDaniels and Baltimore offensive coordinator Greg Roman, a person familiar with the requests told The Associated Press on Monday.

The team will also interview San Francisco defensive coordinator Robert Saleh and Minnesota offensive coordinator Kevin Stefanski, said the person who spoke on condition of anonymity because the teams are not confirming the Browns’ interest.

49ers coach Kyle Shanahan said Saleh will meet with the Browns in the Bay Area this week.

Per NFL rules, the Browns can not interview McDaniels until after New England's wild-card game against Tennessee on Saturday. They can speak this week to Roman because the Ravens have a bye and to Saleh before the Niners, who are the NFC's top seed, host a game next week.

The Browns are likely to expand their search to include former Green Bay coach Mike McCarthy, who was thought to be the front-runner for Cleveland's job last January but never interviewed with the team and spent the past season out of football.

McCarthy, who has already met with Carolina about its opening, worked in the past with Browns general manager John Dorsey as well as front office executives Eliot Wolf and Alonzo Highsmith.

Former Panthers coach Ron Rivera is another candidate on the Browns' wish list.

McDaniels and Roman both have Ohio roots. McDaniels has been linked to previous coaching searches in Cleveland. The former Denver coach interviewed for the Browns’ job in 2014, but he was not one of their candidates last winter when they made the surprising move to hire Kitchens despite his lack of head coaching experience.

On Monday, McDaniels downplayed any interest in going home to Northeast Ohio.

“I’m 100% fully invested in getting ready for Tennessee and trying to put our best performance of the season out there on Saturday night,” McDaniels said Monday on a conference call when asked about the Cleveland opening. "We have a lot of work to do. That’s where my focus will be. That’s where it’s at now and it’ll stay there. That’s the best thing for our team. It’s the best thing for me."

McDaniels would seem to fit the profile Browns owners Dee and Jimmy Haslam are looking for in their latest attempt to find the right coach. They've fired five coaches since taking over the franchise in 2012.

The 43-year-old McDaniels, who went 11-17 in two seasons with the Broncos, has won six Super Bowl titles alongside Bill Belichick and he’s been successful in working closely with quarterbacks.

One of Kitchens’ failings this season was that quarterback Baker Mayfield regressed after a strong rookie season.

Roman, 47, also has a proven track record with quarterbacks. He's overseen the NFL's highest-scoring offense this season and has helped develop QB Lamar Jackson into a superstar and the league's likely MVP.

Stefanski was a finalist for the Browns' job last season.

The 40-year-old Saleh has San Francisco's defense playing at an elite level. He's been Shanahan's coordinator since 2017.

As yet another coaching search began, Browns players packed away 2019 into boxes while pondering what went wrong and what's ahead.

There was a sense of deja vu for left guard Joel Bitonio, who will be playing under his fourth coach since 2014.

The Cleveland job is challenging, but no more so than any place else.

“We've lost since we've been back and we have to turn it around, we have to find a way,” Bitonio said. “But I think it's an NFL coaching job and if you get the right people in the right spots, you have a chance to win here. There's nothing cursed about this city or anything like that. You put the right guys on the field, you put the right coaching staff in, you have all the people working for the same goal and you're going to win games.”

Landry will soon visit a specialist to determine whether he'll need to undergo surgery for a hip injury that bothered him most of the season. He said an operation is a last resort since he would require up to eight months of recovery time.

Despite not being 100 percent, Landry finished with 83 catches for 1,174 yards and six touchdowns.

Landry, though, feels the young QB will learn from the experience and bounce back.

"He’s tough as hell and he shows up each and every day with the same mindset," Landry said. “He’s never wavering, he continues to try to lead and be a leader for us, vocally, by example, whatever way possible and that’s something that’s special. He’s only two years in. He’s continued to grow. He wants to get better and that’s the most promising thing."

Suspended defensive end Myles Garrett made a brief appearance in the locker room. The NFL has permitted him back inside the facility while serving his indefinite ban for clobbering Steelers quarterback Mason Rudolph over the head with a swung helmet.