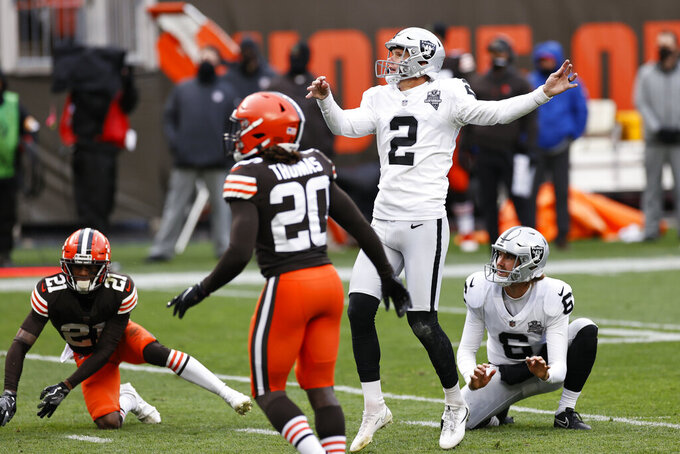 Las Vegas Raiders kicker Daniel Carlson (2) watches the ball after kicking a 24-yard field goal during the second half of an NFL football game against the Cleveland Browns, Sunday, Nov. 1, 2020, in Cleveland. The Raiders won 16-6. (AP Photo/Ron Schwane) 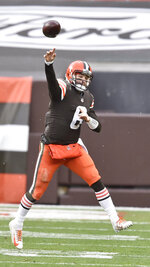 Hardly ideal football weather, but the kind the Browns are supposedly built to thrive in. And, the kind they hope to have for future home playoff games.

On Sunday, they shivered and shriveled in the cold.

Instead, the Las Vegas Raiders, who play inside a toasty dome in the desert, came to chilly Northeast Ohio and manhandled Cleveland throughout a 16-6 win, raising more questions about whether the Browns have turned the corner or remain a major work in progress.

They didn't take advantage of their supposed home-field advantage as the Raiders (3-3) controlled the clock and line of scrimmage from start to finish. Las Vegas rolled up 208 yards rushing and had the ball for nearly 38 minutes.

But even in the messy clean up, the Browns got some good news as star defensive end Myles Garrett's knee injury isn't serious. An MRI showed no structural damage for Garrett, who hurt his knee early against the Raiders and was used sparingly the rest of the game.

Stefanski doesn't expect Garrett to miss any games, which is a huge relief for the Browns, who are hoping to end the NFL's longest current playoff drought with a strong second half. They'll host the Houston Texans on Nov. 15.

“We dodged a bullet,” Stefanski said. "We will just need him to come back on Wednesday and see if he is ready to practice. If he is not, we will have a few days here to rest and then get ready to roll next week.”

Stefanski and his coaching staff will spend the bye week assessing the club's strengths and weaknesses. There have been plenty of positives over the first eight games, an equal amount of negatives and a few things that still need time to calculate.

One of those is quarterback Baker Mayfield, who had some throws affected by the wind against the Raiders and was doomed by some dropped passes, penalties and an early fumble by rookie tight end Harrison Bryant that ended a promising drive.

Evaluating whether Mayfield is their long-term answer is the Browns' single biggest objective in 2020, and Stefanski has been encouraged by what he's seen from the third-year QB.

“I think Baker is doing a nice job of operating, getting us into the right checks, getting us in and out of the huddle and using his cadence yesterday getting them to jump offside a few times,” Stefanski said. "He is progressing, he is making plays and I know he is going to tell you that he thinks there are more plays to be made. I do believe that he is going to continue to improve.”

Cleveland's offensive line has managed to keep Mayfield mostly out of harm's way despite being down starting right guard Wyatt Teller, who missed his third straight game with a calf injury.

Mayfield wasn't sacked for the second game in a row and has only been sacked 11 times in 2020.

The Raiders blasted open huge holes against Cleveland's defensive front, which had been playing pretty well against the run. Even late in the game when it was obvious Las Vegas was going to run the ball, the Browns couldn't stop it.

"That is something that we will look at long and hard to find a way to get better,” Stefanski said.

It wasn't all bad on defense as end Olivier Vernon got his first two sacks of 2020. The 30-year-old has battled some injuries since coming to Cleveland in the Odell Beckham trade. If Vernon can deliver consistent pressure, it will take pressure off Garrett and give offenses something else to deal with.

Wide receiver Jarvis Landry's two uncharacteristic drops, one that would have been a 20-yard touchdown, were critical. He's been playing with a broken rib, so there's no questioning Landry's toughness. However, as the club's No. 1 receiver, Landry has to make all those plays, especially with Beckham no longer an option for Mayfield.

Garrett's injury is the latest significant one to impact the Browns, who were missing three offensive starters Sunday and won't have Beckham for the rest of 2020. Star running back Nick Chubb could return following the bye after missing four games with a sprained knee. Stefanski feels “really good” about top tight end Austin Hooper (appendectomy) returning after the bye.

1 — The number of times the Browns have stopped their opponent on 14 fourth-down tries.

The time off will allow the Browns to get healthier, evaluate their roster and make any necessary changes before the Texans come to town.