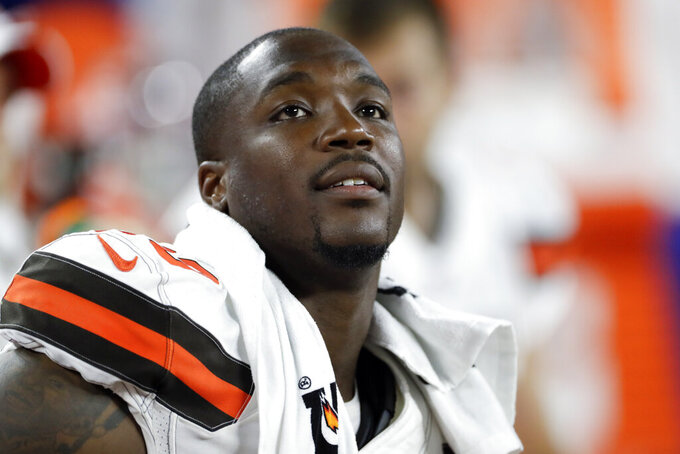 FILE - In this Aug. 8, 2019, file photo, Cleveland Browns defensive end Chris Smith (50) sits on the sideline during the first half of an NFL preseason football game against the Washington Redskins in Cleveland. Petara Cordero, the girlfriend of Smith has been killed in an accident early Wednesday, Sept. 11, 2019. The team said Cordero, 26, died when she was struck by an oncoming car on I-90 West at around 2 a.m. after she and Smith had pulled to the side of the road when the car he was driving had a tire malfunction and spun out. (AP Photo/Ron Schwane, File)

EAST RUTHERFORD, N.J. (AP) — Browns defensive end Chris Smith will be honoring his late girlfriend as he believes she would wish.

One week after Petara Cordero was killed in front of him in a tragic accident, Smith said he will play Monday night when the Browns visit the Jets.

The 26-year-old Cordero was killed after she exited Smith's Lamborghini and was standing on the highway's shoulder when she was hit by an oncoming car. Smith's car had blown a tire, sending his vehicle into a spin.

Smith spent several days away from the team's facility before returning to practice on Saturday.

One of the team's most popular players, Smith is in his second season with the Browns.

Last week, Browns coach Freddie Kitchens and several of his teammates visited Smith at his home. Kitchens said the team's closeness was helping Smith as he grieved.

"When you have a bunch of guys who are close and continuing to move in the same direction, it affects everybody because you end up caring about the person," Kitchens said. "Funny thing happens when you start playing this game of football, you think you're just playing and coaching, and everything is fine until life hits. Then when life hits, it is kind of a reality check."

Smith was uninjured in the crash, which remains under investigation. Cleveland Police said the 47-year-old woman who hit Cordero admitted drinking before the crash.

Through the publicist, both the Cordero and Smith families expressed gratitude for the support and asked for "complete privacy as both families take the time needed to grieve the sudden and unexpected loss of their beloved Petara Cordero."