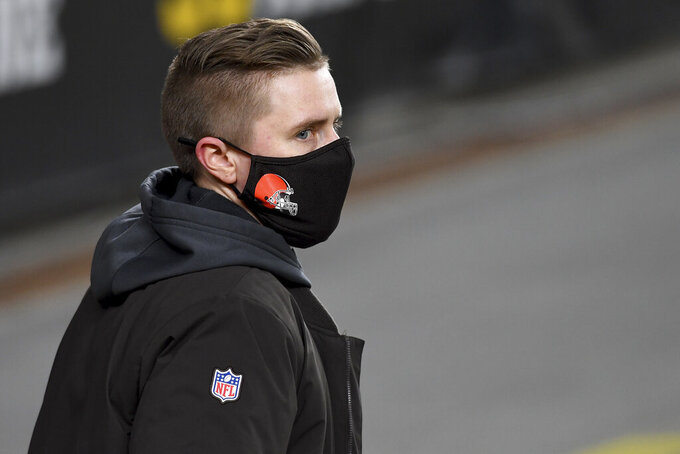 FILE - In this Jan. 10, 2021, file photo, Cleveland Browns chief of staff Callie Brownson walks out onto the field before the team's NFL wild-card playoff football game against the Pittsburgh Steelers in Pittsburgh. Browns are aware of a recent incident involving Brownson, who could face discipline from the team and NFL. One of just a handful of female coaches in the league, Brownson just completed her second season with the Browns. The team released a statement on Tuesday night, June 8. Cleveland.com reported that Brownson was charged with drunken driving on May 27 in Brunswick, Ohio. The AP left a message with police to obtain records. (AP Photo/Justin Berl, File)

CLEVELAND (AP) — Cleveland Browns chief of staff Callie Brownson could face discipline from the team and the NFL for drunken driving charges.

One of just a handful of female coaches in the league, Brownson was arrested last month with a blood-alcohol level twice the legal threshold for driving in Ohio. She's starting her second season with the Browns.

The team released a statement on Tuesday night.

“We are aware of the incident and are extremely disappointed that a member of our organization put themselves in this situation,” the statement said. “We take this matter very seriously and will take the appropriate disciplinary actions.”

According to court documents, Brownson was charged with drunken driving on May 27 in Brunswick, Ohio. She was driving 55 mph in a 35 mph zone when she was stopped at 12:27 a.m. Police said her blood-alcohol content was .215. The state's legal limit is .08.

Coach Kevin Stefanski lauded the 31-year-old Brownson for her work and versatility last season, calling her “a star.”

She became the first woman to be a position coach on the sideline during an NFL game when she filled in for tight ends coach Drew Petzing, who was absent for the birth of his first child when the Browns played at Jacksonville.

The Browns are holding organized team activities this week and will have a mandatory minicamp next week.

By Michael Marot 60 minutes ago
an hour ago
2 hrs ago
By Will Graves 4 hrs ago
By Juan A. Lozano 4 hrs ago