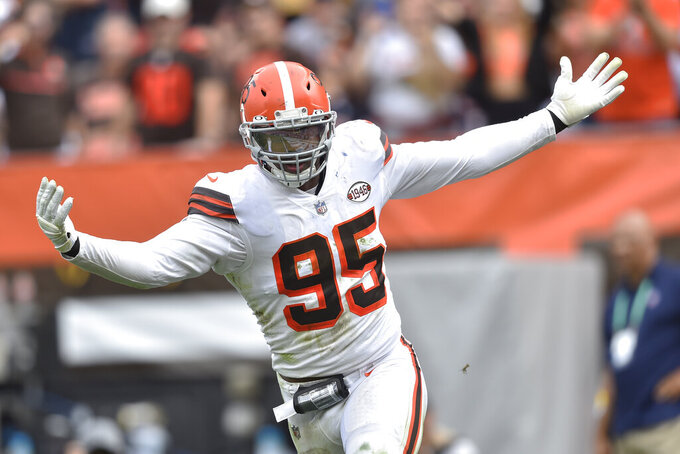 Garrett is listed as questionable — 50/50 chance of playing — by the Browns (3-1), who are dealing with numerous injuries across their second-ranked defense and continue to downplay quarterback Baker Mayfield's shoulder injury.

While his teammates went through the portion of practice open to media members, Garrett worked on his conditioning to the side with starting rookie cornerback Greg Newsome, who will miss his second straight game with a calf injury.

Afterward, Garrett, who was rested Wednesday and was limited in Thursday's practice, said he's been dealing with “nagging pain” for several weeks, but wouldn't specify his injuries.

“I’m fully expecting to go,” he said. "It’s been bothering me since last week. I had some pain then, even the week before. Nobody’s 100% across the league, so I’ve just got to make sure I’m as close to there as possible and make sure I can be a positive force when I’m out there.”

Garrett leads the league with six sacks and is tied for the lead with seven tackles for loss.

Pressed about what's bothering him, Garrett said: "I can’t tell you that.”

The 2020 All-Pro said his injuries bother him most before kickoff.

"When the adrenaline gets flowing, it starts to go away, but at the beginning, before the game, that’s when I’m really trying to work on it as much as I can to make sure it doesn’t hold me back,” he said.

Garrett may be the most prominent Browns defensive player dealing with an injury, but he's not alone.

Wills' injury is the most significant. The first-round draft pick in 2020 has played the past three weeks despite not practicing due to a severe sprain suffered in Week 1 at Kansas City.

Coach Kevin Stefanski said Wills' "has a chance to play, but we will continue to evaluate him, and again, use the next 48 hours to make that determination.”

If Wills can't play, rookie James Hudson will likely make his first career start. Hudson replaced Wills against the Vikings in the second half for 21 plays.

“He’s still young and he’s still learning, but at least he has exposure to it and he’s seen it, so it doesn’t freak him out in the middle of a game: ‘I haven’t seen this move. I haven’t seen that,’" Callahan said. “ He’s seen the full repertoire, trust me.”

As for Mayfield, who has played the past three weeks with a torn labrum in his left, non-throwing shoulder, Stefanski said there is nothing in particular that worries him about the quarterback continuing to play.

“I can’t speculate about what the concern would be,” he said. "I would just tell you, he has told you guys that it is not a concern of his, and I have watched him practice, and he has done a nice job.”