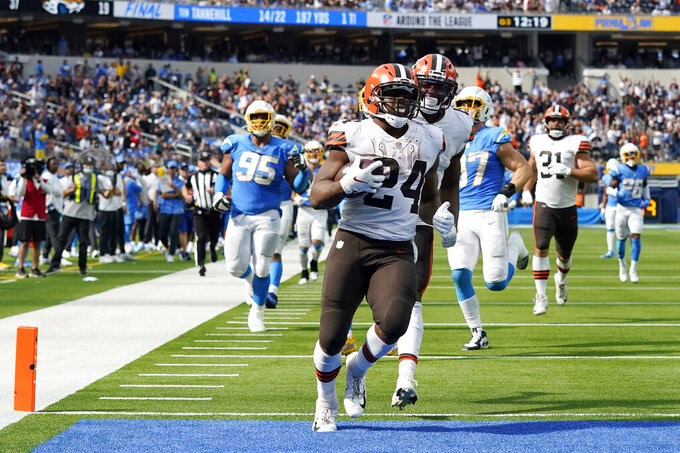 Cleveland Browns running back Nick Chubb (24) scores a touchdown against the Los Angeles Chargers during the second half of an NFL football game Sunday, Oct. 10, 2021, in Inglewood, Calif. (AP Photo/Gregory Bull)

Browns star back Nick Chubb will miss his second straight game with a calf injury, leaving Cleveland without its two best backs Thursday night against the Denver Broncos.

Chubb was ruled out Tuesday by coach Kevin Stefanski before practice. He also didn't play against Arizona on Sunday, when running back Kareem Hunt suffered a calf injury that could sideline him for more than a month.

Hunt was placed on injured reserve — meaning he will miss at least three games — along with rookie linebacker Jeremiah Owusu-Koramoah.

The Browns lead the league in rushing, averaging 165 yards per game. While Chubb and Hunt are recovering, D'Ernest Johnson will step in as Cleveland's primary back and make his first start Thursday. He has just three carries for 11 yards this season.

Johnson provided a spark last season when Chubb got hurt against Dallas and missed four games with a sprained knee. Johnson came in and ran for 95 yards in the win over the Cowboys.

“You guys saw D’Ernest in there last season at times, and he was very dependable and he was very accountable,” Stefanski told reporters. "Broke some long runs for us. Can really catch the ball. I have a ton of faith in D’Ernest, just like all of these guys who may be called upon.”

One of the game's top runners, the 25-year-old Chubb, who has 523 yards and four touchdowns in five games, hurt his calf toward the end of Cleveland's loss to the Los Angeles Chargers on Oct. 10.

The severity of Chubb's injury is not known while Stefanski said on Monday that Hunt will likely be out in the “ballpark” of four to six weeks.

The 26-year-old Hunt is invaluable to Cleveland's offense as a complement to Chubb as well as being a run-and-receiving threat capable of breaking off a big play or gaining tough yards. Hunt has rushed for 361 yards and five touchdowns.

Stefanski said quarterback Baker Mayfield will be limited in practice and it's too early to know if he'll play Thursday because of a painful shoulder injury or if starting tackles Jack Conklin and Jedrick Wills Jr. will be back after sitting out Sunday.

Also, wide receiver Odell Beckham Jr. has a shoulder issue and is not expected to do much in practice.

A second-round draft pick from Notre Dame, Owusu-Koramoah suffered a high ankle sprain against the Cardinals. He's been one of the bright spots on an Browns inconsistent defense and his playing time has steadily increased all season.

Owusu-Koramoah's loss will have a ripple effect. Anthony Walker Jr. will likely stay on the field for passing downs and Mack Wilson's playing time should increase.