Browns star running back Chubb being checked for concussion 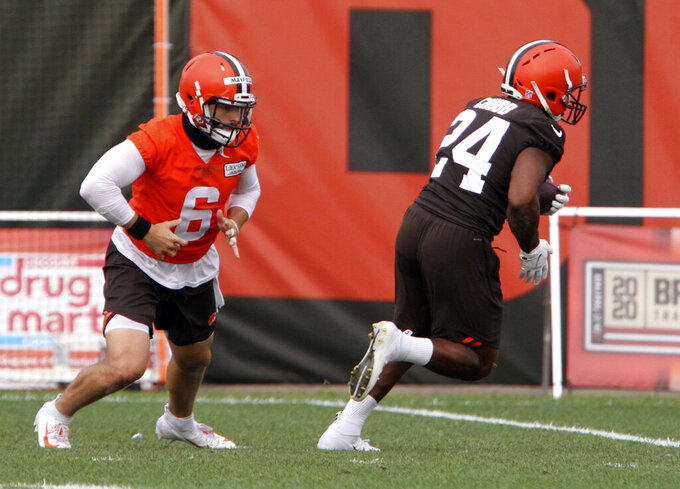 BEREA, Ohio (AP) — The rain came down hard, and then Nick Chubb got dropped.

Chubb may have suffered a concussion when linebacker Mack Wilson tackled the Pro Bowl running back around the neck and head during an 11-on-11 scrimmage on the first day new Cleveland coach Kevin Stefanski had his players wearing pads.

Chubb, who rushed for 1,494 yards last season, was taken down by Wilson after catching a short pass about halfway through Monday's workout. A few minutes later, Chubb walked slowly from the field and into the team's training facility while being accompanied by a trainer.

A team spokesman said Chubb is being examined for a possible head injury.

After Wilson pulled down Chubb, tight end David Njoku and guard Joel Bitonio ran over toward the sideline to confront the second-year linebacker. Defensive coordinator Joe Woods yelled at Wilson, and Stefanski came over to talk with him.

The Browns were not supposed to be tackling ball carriers to the ground. Before practice, Stefanski said he had spoken to his players on Sunday night about not being overly aggressive as they transition into pads and more contact.

“The pace of practice should look exactly the same as it did yesterday in shells,” Stefanski said. "They have to understand how to practice hard and take care of each other regardless of the dress or the attire that they are wearing.”

Monday's workout was a wet one as showers soaked the Browns for most of the 90 minutes they were on the field. After Chubb went off, the tempo of practice was slowed to half-speed in order to avoid any possible injuries on the slick surface.

A second-round pick in 2018, Chubb is already regarded as one of the NFL's top backs. He ran for 996 yards as a rookie and was one of the few bright spots for the Browns last season, when he finished second to Tennessee's Derrick Henry for the rushing title.

Last week, Chubb said he was looking forward to how Cleveland's offense will look under Stefanski, the former Minnesota coordinator who has favored a run-oriented attack in the past. He figures to make sure No. 24 gets plenty of touches.

Stefanski is already at a disadvantage compared to many other teams because the coronavirus pandemic limited the Browns' offseason to just virtual classroom learning. He's got to maximize his time with players on the field and it appears Cleveland's offense has some issues to work through.

The Browns defense dominated much of Monday's workout, but the offense missed some chances at big plays.

Quarterback Baker Mayfield badly overthrew a wide-open Odell Beckham Jr. early on, and Njoku dropped a pass over the middle as the downpour intensified.

NOTES: Star defensive end Myles Garrett remains sidelined with a hamstring issue. Garrett has yet to practice, but did more walk-through activities than during the previous two practices. ... WR Jarvis Landry was kept out of practice as a precaution as he returns from offseason hip surgery. ... Starting C JC Tretter (knee), S Karl Joseph (foot) and WR Damion Ratley (groin) also sat out. ... Stefanski said he's still “working through” whether he or coordinator Alex Van Pelt will call plays this season.