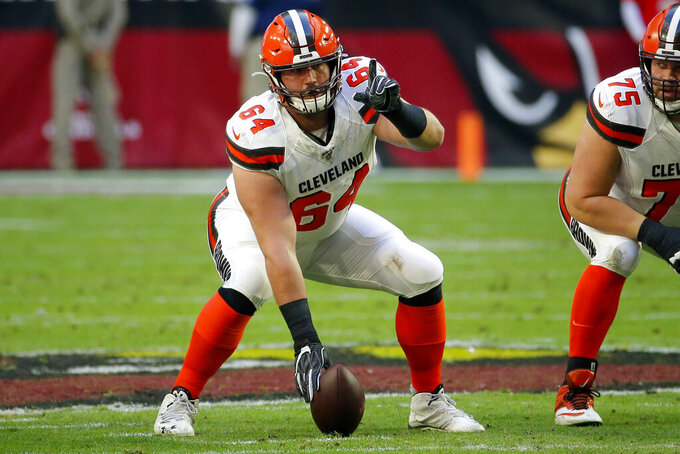 FILE - In this Dec. 15, 2019, file photo, Cleveland Browns center JC Tretter (64) lines up against the Arizona Cardinals during the first half of an NFL football game in Glendale, Ariz. Browns starting center JC Tretter returned to practice Monday, Sept. 7, 2020, after being sidelined for all of training camp after having knee surgery. Coach Kevin Stefanski said Tretter, the NFLPA President, was back on the field as the Browns began preparing for Sunday's season opener at Baltimore. (AP Photo/Rick Scuteri, File)

CLEVELAND (AP) — The Browns could have their man in the middle for Sunday's opener.

Starting center JC Tretter returned to practice Monday after being sidelined all of training camp following right knee surgery, and it's not out of the question that the veteran could play this week against the Baltimore Ravens.

Tretter, the NFLPA's President, had surgery on Aug. 13 just before the Browns opened camp under first-year coach Kevin Stefanski. The Browns have not said if Tretter injured his knee in the days leading up to camp or if surgery was required for a pre-existing condition.

"It was good to have JC back out there,” Stefanski said following Monday's workout, which was moved indoors because of thunderstorms. “Not going to get into the extent to which he was back out there, we’ll deal with that on Wednesday. But good to have him out there in his pads.”

It's too early to know if Tretter, who has not missed a game in three seasons with Cleveland and played through a severely sprained ankle and other injuries, will be allowed to play against the Ravens.

Rookie Nick Harris has been working with Cleveland's first-team offense and the fifth-round pick from Washington has been impressive. Tretter, though, has experience and has faced Baltimore's stout defense six times.

"Obviously JC’s a veteran, he’s seen a lot of football,” Stefanski said. “There’s value in that. He’s a leader of the football team. So really good to have him out there today.”

The Browns could take a cautious approach with Tretter since they'll play their home opener against Cincinnati on Sept. 17, just four days after visiting Baltimore.

Free agent signing Jack Conklin has taken over at right tackle with rookie first-round pick Jedrick Wills on the left side after playing his college career at Alabama on the right side. Steady Pro Bowler Joel Bitonio is at left guard with Wyatt Teller taking over at right guard.

In other Browns injury news, starting linebacker B.J. Goodson remains away from the team for personal reasons, but Stefanski expects him back soon.

“B.J. has been great for us in the meeting room and on the grass,” Stefanski said. “He is just a very high-energy player. You hear him before you see him. I am really excited about what B.J. brings to our defense.”

Also, starting cornerback Greedy Williams continues to be sidelined with a shoulder issue and his status for Sunday is unclear. The Browns are also missing cornerbacks Kevin Johnson (lacerated liver) and M.J. Stewart Jr. (hamstring).