Browns starting CB Newsome out this week with calf injury 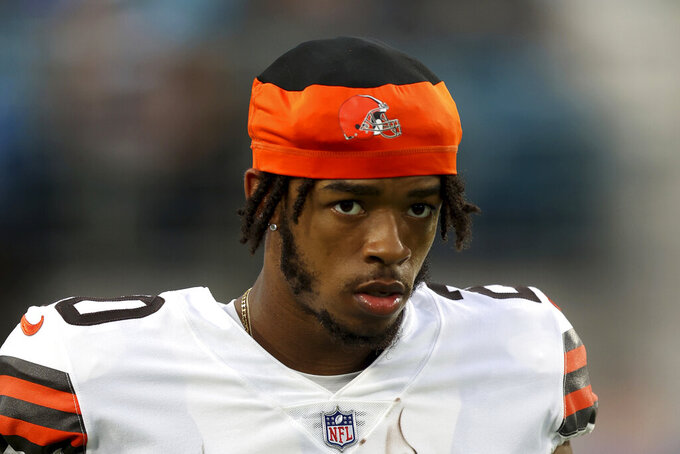 Coach Kevin Stefanski opened his Wednesday media briefing by ruling Newsome out against the Vikings (1-2). Stefanski said the 21-year-old starter is “week to week” but that he will not have to go on injured reserve, which would have meant he would miss at least three games.

A first-round draft pick from Northwestern, Newsome has looked comfortable in his first three games as a pro with the Browns (2-1). Stefanski isn't sure when Newsome got hurt in Sunday's win over Chicago. He played in the fourth quarter before leaving the game.

Last week, Newsome said he was somewhat surprised defenses haven't been throwing much in his direction. He's been credited with seven tackles and two pass breakups in three games.

With Newsome out, Greedy Williams will slide into the opposite starting spot from Denzel Ward. Williams played the last eight snaps in Sunday's 26-6 win over the Bears and had a pass breakup.

Newsome beat out Williams for the starting job in training camp. The Browns drafted Newsome not only for his talent, but as insurance because Williams, a second-round pick in 2019, missed all last season with a nerve injury in his shoulder.

Stefanski has been pleased with Williams so far.

“He’s had limited reps in the games but seeing him a lot at practice and I think he’s done a nice job,” Stefanski said. “Going all the way back to when he first got back out there and worked through it and got his wind back, I think you just see a guy who’s continuing to get better.”

Browns starting center JC Tretter (knee) and left tackle Jedrick Wills Jr. (ankle) were also kept out of practice, but that wasn't a surprise because both have been battling through injuries for several weeks.