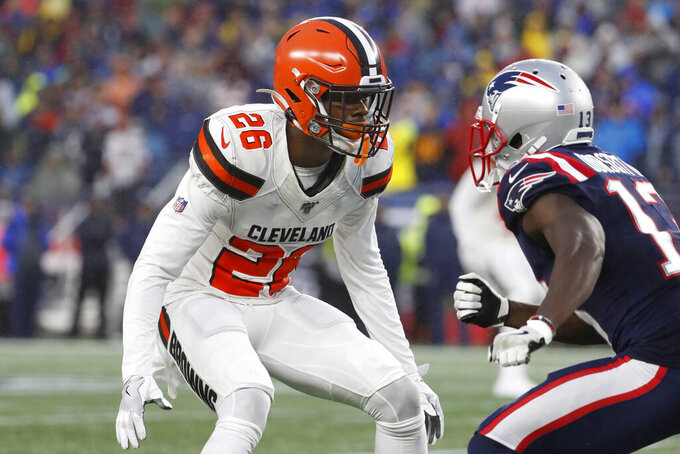 CLEVELAND (AP) — As several big names — Nick Bosa, Saquon Barkley, Christian McCaffrey and others — were added to a long list of injured players on Sunday during a cringe-worthy afternoon across the NFL, Browns linebacker Mack Wilson felt several emotions.

Wilson, who feared his season was over when he hyperextended his right knee in practice last month, returned to the field Monday along with cornerback Greedy Williams and nickel back Kevin Johnson, giving Cleveland back three expected starters to help a defense that has given up 68 points in two games.

The Browns are healing after being ravaged by injuries during training camp and could go into Sunday's game against the Washington Football Team as healthy as they've been in 2020.

When he went down on Aug. 18 after breaking up a pass in practice, Mack feared the worst.

“I was just thinking to myself, ‘Why me?’” he said on a Zoom call. “I thought I was going to be done for the season with all the pain I was feeling.”

Wilson's injury came a day after he made a hard, high tackle on Browns running back Nick Chubb, who suffered a concussion when the Pro Bowler's head slammed into the turf during practice. Wilson felt terrible about what he'd done to his teammate and then couldn't help but think his injury was related.

“I felt like it was karma, honestly,” he said.

But the second-year pro from Alabama stayed positive, received a huge boost when surgery was ruled out and recovered more quickly than expected.

“They gave me like 10-11 days to see if the swelling will go down,” said Wilson, who started 14 game as a rookie last season. “It was like maybe the sixth day and the doctor had said he had never seen anything like it as far as my healing process.”

Wilson believes he's ready to play now but will leave that up to the doctors and coach Kevin Stefanski.

Same for Williams, who missed Cleveland's first two games with a shoulder injury suffered in practice last month. But the 2019 draft pick from LSU feels he can contribute immediately. He'll likely wear a brace to protect his shoulder.

Terrance Mitchell started in place of Williams and on the opposite side of Denzel Ward, but Stefanski wouldn't say who will be with the first-team against Washington.

“I know on a depth chart you have to list two starting corners, but it is a good problem for us to have guys that we feel very confident in to play,” Stefanski said. "So we will work through that as Greedy’s health becomes apparent to us.”

Johnson's comeback from a potentially life-threatening injury may may be the most heart-warming for the Browns.

The 28-year-old knew something was out of the ordinary when rookie tight end Harrison Bryant landed on him during a routine play on Aug. 19. Johnson was defending a pass when Bryant's full weight crashed down on his chest and stomach.

He struggled to catch his breath and wondered if he had cracked a rib.

“I thought I got the wind knocked out of me really, really bad," he said.

But the discomfort didn't subside, so Johnson underwent more tests and wound up spending two nights at University Hospitals.

It's the latest medical setback for Johnson, who said his previous injuries prepared him for this one.

“I've felt adversity like this before in my career,” he said. “I knew the world wasn't over when it happened.”

Doctors said his liver has completely healed and he won't have to wear any extra padding.

While scouting Washington on TV, Stefanski said seeing the rash of injuries around the league was tough.

NOTES: Starting RT Jack Conklin (ankle, finger) was also back after missing Thursday's win over Cincinnati. ... DEs Olivier Vernon (abdomen) and Adrian Clayborn (hip) and linebacker Jacob Phillips (knee) worked on the side with trainers and medical staff during the short portion of practice open to media members.