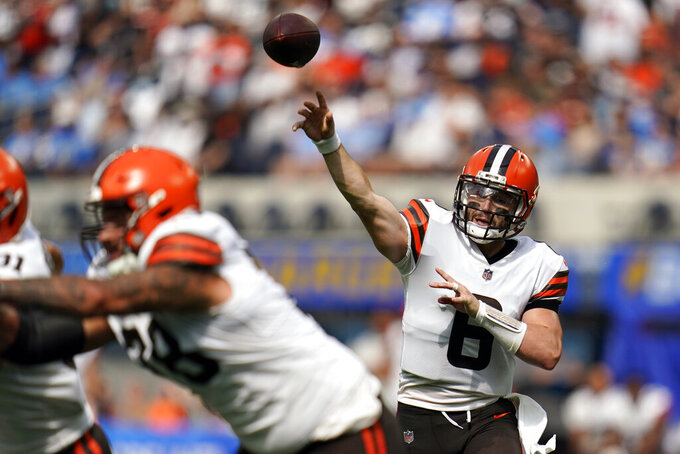 CLEVELAND (AP) — There were numerous bumps and bruises absorbed by the Browns in a high-scoring shootout loss on Sunday in Los Angeles.

One won't show up on the team's lengthy injury report.

The NFL's coach of the year in 2020 made some questionable play calls in the fourth quarter — most notably a third-down draw — when the Browns were trying to protect a one-point lead in what became a hard-to-swallow 47-42 loss.

On Monday, Stefanski said he wished he'd done something different.

“This is where I have to put our guys in positions to succeed,” he said, referring to his head-scratching decision to run the ball and giving it back to Justin Herbert and the Chargers. "I didn’t do that there, and I’m sick about it.”

Stefanski certainly wasn't the only reason the Browns (3-2) couldn't put away the Chargers (4-1).

There were costly injuries to Cleveland's inexperienced secondary, sturdy right tackle Jack Conklin went down with a knee injury that left the Browns playing backups at both ends of the line.

Stefanski offered no excuses. He accepted the blame for running on third-and-9 — with star back Nick Chubb on the sideline — on Cleveland's second-to-last possession when a pass play not only seemed obvious but essential.

The Browns couldn't stop the Chargers, but they were still up 42-41 when they got the ball back with 3:08 left.

After Kareem Hunt ran for a yard, quarterback Baker Mayfield threw an incompletion before Stefanski, who had aggressively gone on fourth downs earlier and has shown a fearlessness in two seasons, inexplicably called for a run that went 3 yards.

Cleveland punted, and Herbert quickly drove the Chargers for a TD.

Afterward, Stefanski said his decision on third down was influenced by the tenuous situation at tackle and because he “didn't feel like I wanted to give a chance for something bad to happen.

The comment raised eyebrows along with conjecture about whether he didn't trust Mayfield, who is playing with a torn labrum in his left shoulder.

“I definitely got too wrapped up in the previous play call with the clock stopping and how that unfolded,” Stefanski said, explaining his thought process. “I have to put our guys in position and I can’t do that to our team.

"I have to do a better job. Bottom line.”

It was a rare misstep from the 39-year-old Stefanski, who has done little wrong in helping change Cleveland’s culture over the past two years. He’s drawn praise for being accountable, and this was yet another example — a young coach admitting he maybe wasn’t up to the moment.

Following the game, Mayfield and star defensive end Myles Garrett openly criticized the officials, focusing on an interference penalty against cornerback A.J. Green, who had his jersey grabbed by Chargers receiver Mike Williams.

Stefanski said he spoke to his players about handling blown calls.

"We control a lot of that game and we need to do better.”

Cleveland's running game is unrivaled. With legendary back Jim Brown watching from the owner's suite, the Browns gained 230 yards on the ground. They lead the league in total rushing yardage (938), yards per game (187.6), average per attempt (5.4) and touchdowns (12).

Following dominant performances against Chicago and Minnesota, the Browns couldn't stop Herbert and the Chargers, who rolled up 493 yards. Two communication breakdowns in the secondary were costly as Herbert hit wide-open receivers for long TDs.

In fairness, due to the injuries, Cleveland was down to its fourth and fifth cornerbacks for most of the fourth quarter and end Jadeveon Clowney (elbow) didn't play.

Tight end David Njoku had his best game as a pro, catching seven passes for 149 yards, 71 coming on a TD in the fourth quarter. Njoku didn't have a single target the previous week against the Vikings.

Ultimately, the defensive miscommunications fall on coordinator Joe Woods, who has drawn the wrath of Browns fans for much of this season and is back under fire after getting a two-week pass.

The Browns are beaten up. Stefanski was still awaiting more test results on Conklin, cornerbacks Denzel Ward (neck) and Greedy Williams (shoulder), who were all knocked out of Sunday's game.

Stefanski said it would not be “appropriate” to say if any of the injuries is long term until he sees the MRIs.

Rookie linebacker Jeremiah Owusu-Koramoah was cleared to travel after being taken to a hospital for a throat bruise.

Also, Stefanski said Clowney was kept out because his knee stiffened during pregame warmups.

The Browns get a third chance to beat an elite team as they host the unbeaten Arizona Cardinals (5-0). It's the first of three home games in 14 days for Cleveland, which will host Denver on Oct. 21 and Pittsburgh on Oct. 31.