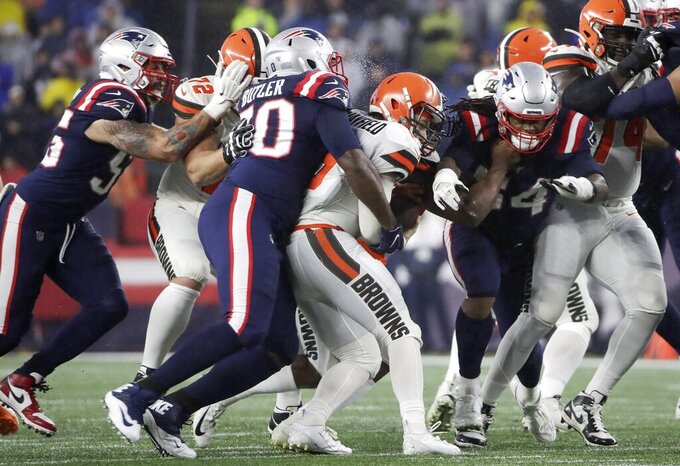 BEREA, Ohio (AP) — With a chance to see how they stacked up against the NFL's best team and its unrivaled coach, the Browns and Freddie Kitchens flopped.

They're not in the same league with the Patriots right now. Nowhere close.

Three turnovers on three consecutive plays — something rarely seen in a Pop Warner game, never mind at football's highest level — in the first quarter Sunday doomed the Browns, who spent half of the game going in reverse due to 13 penalties during a 27-13 loss as unbeaten New England gave coach Bill Belichick his 300th career victory.

There was irony in Belichick reaching the milestone against the Browns. He got his first win as their coach 24 years ago.

Since he left, Cleveland has mostly been an embarrassment.

Coming off their bye week, the Browns (2-5) were again undisciplined and sloppy, and this highly anticipated season of expectations slid a little deeper into a concerning hole.

It's a bad look for the Browns. But especially bad for Kitchens, forced into learning on the fly as a first-year coach.

"Everything about the program should reflect on me and I will accept it," he said Monday. "But I also have a hand in fixing it."

There's plenty of work to be done.

The Browns have been beating themselves with penalties — they lead the league with 70 and turnovers since Week 1 — and the most troubling aspect of the mistakes is that Kitchens and his staff have been harping on the self-inflicted wounds since training camp and yet the Browns continue to make them.

They're listening. They're not learning.

"It is a commitment that they have to have to each other and accountability to each other because it is very evident that it is costing us football games," Kitchens said. "When they decide that, it will change. We are going to do the things to speed up that process, which we have been doing. Everybody understands the problems. We are going to work to fix those problems."

On Sunday, running back Nick Chubb, one of the Browns best offensive players, had the first two fumbles of his career. The first came on a freak play when the ball was accidentally kicked from his grasp by offensive lineman Joel Bitonio and returned by the Patriots for a touchdown. Seconds later, Chubb ripped off a 44-yard run only to be stripped from behind.

Then, Kitchens decided to call a risky shovel pass by quarterback Baker Mayfield that was intercepted.

There's a growing sense that Kitchens might be overmatched, that his first head-coaching gig might be more than he's ready to handle. The Browns' most embarrassing moment Sunday came in the fourth quarter when Cleveland intentionally committed a penalty on fourth-and-11 in punt formation to avoid using its last timeout.

On fourth-and-16, Mayfield got sacked.

Kitchens was adamant he's not handing over any duties.

"Not happening," he said. "I am calling the plays. I am the head coach."

Unless the Browns start winning, that might not be the case much longer.

The turnovers shrouded Chubb's continued excellence. He gained 131 yards on 20 attempts against the league's top defense. It's long past time for the Browns to make him their primary weapon and get him more touches.

The lack of discipline is beyond alarming. No team has been flagged more than the Browns, who not only make penalties but commit them at the worst possible times.

Kitchens benched starting left tackle Greg Robinson last week because he was penalty prone, and there could be more lineup changes for the club's biggest yellow-flag offenders.

Defensive end Olivier Vernon had his second straight strong game. He recorded his second sack, never came off the field and helped create pressure along with star Myles Garrett. This is the one-two punch off the edge the Browns envisioned when they acquired Vernon.

Kitchens is taking heat from some of the same fans who applauded his hire. The 44-year-old has gone from preaching that his team needs to "play better" to "the buck stops with me." Kitchens has vowed to do whatever's necessary to turn things around.

He's running out of time.

Mayfield and wide receiver Jarvis Landry took hard hits in the fourth quarter, but Kitchens said both "will be fine."

1 — Total combined touchdown catches through seven games for Odell Beckham Jr. and Landry, two of the NFL's best receivers, who were supposed to take Cleveland's offense to new heights.

The schedule gets much more favorable — Cincinnati (0-8) twice, Miami (0-6), Pittsburgh (2-4) — after the Browns visit Denver (2-6) on Sunday. The Broncos will be missing quarterback Joe Flacco because of a herniated neck disk.