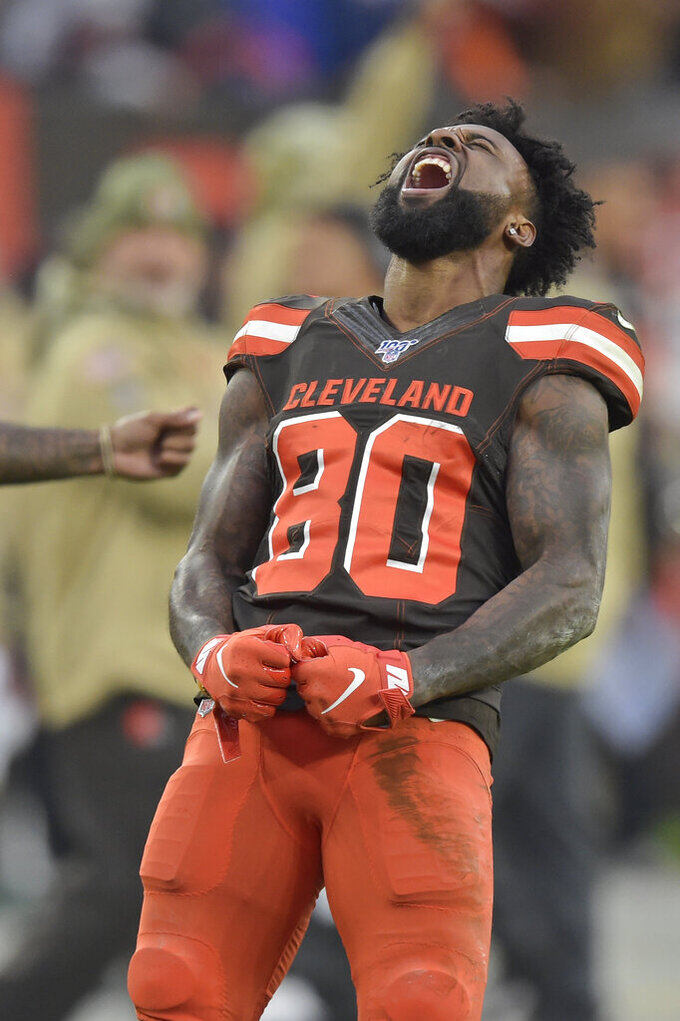 CLEVELAND (AP) — When the Browns finally reached the end zone after so many embarrassing, empty trips inside the red zone, they also re-discovered Rashard Higgins, their mysteriously lost wide receiver.

This strange, unpredictable season had another weird moment.

Desperate for a win, the Browns found a way and ended a four-game skid on Sunday with a 19-16 win over the Buffalo Bills, a victory that provided relief and perhaps a glimpse of Cleveland's offensive future.

Higgins, who had inexplicably gone from quarterback Baker Mayfield's go-to guy last season to coach Freddie Kitchens' doghouse through eight games, caught a 7-yard touchdown pass with 1:44 left as the Browns (3-6) temporarily stopped a season that started with playoff chatter and Super Bowl talk from decaying into a painful coaching search and early discussion about NFL draft positioning.

"It can be a great thing for us," said Mayfield, who threw two TD passes and had his second straight game without an interception. "We still didn't play perfect by any means. We can still learn from the film, move forward and improve. Having a tight victory against a great team is something that we needed, especially at home. Kind of getting the monkey off our back with that one.

"The first win at home in Game 9 isn't something that usually happens, but it can get us going from here."

Some missing pieces emerged for the Browns, namely Higgins and running back Kareem Hunt, who made his debut following an eight-game NFL suspension for two violent, physical off-field altercations last year. Hunt finished with 30 yards rushing and 44 receiving on seven catches.

Higgins had been the odd-man out, and he only got more playing time against the Bills because Kitchens benched Antonio Callaway for an unspecified disciplinary infraction.

It wouldn't be the Browns without some kind of drama.

Hunt's addition to Cleveland's offense had an immediate and dramatic effect. He perfectly complemented Nick Chubb, who ran for 116 yards on 20 carries and buffaloed several Bills defenders on a few runs. A talented receiver, Hunt also became a needed check-down for Mayfield, who didn't force as many throws to star receivers Odell Beckham Jr. and Jarvis Landry.

Kitchens has a full offensive toolbox at his disposal. There are no more excuses, and now it's up to Kitchens — and Mayfield — to use this plethora of playmakers wisely.

"Anytime you get two backs in the game, it is tough for defenses to play differently," Mayfield said. "You have to bring a guy down and you are worried about the receivers on the outside."

The two-back set could become Cleveland's bread and butter going forward. The Browns will get a chance to test out their new 1-2 punch on Thursday night when they host the Pittsburgh Steelers (5-4), who have shaken off a slow start with four straight wins.

Chubb never batted an eye when Hunt's return threatened to curtail his touches. Against the Bills, the second-year back simply made the most of his chances.

He has at least 75 yards from scrimmage in eight consecutive games, the league's longest active streak. Chubb has four 100-yard rushing games this season and his 919 yards rushing are the sixth most by a Browns player through nine games. The top five all belong to Hall of Famer Jim Brown.

The closer the Browns get to the goal line, the farther away they seem. Buffalo stopped Cleveland on eight consecutive plays from inside the 2 in the first quarter and on four more inside the 5 in the second quarter before Kitchens opted to kick a field goal following a false start.

Chubb was stoned by the Bills on five tries near the goal line.

Kitchens isn't changing his approach in the shadow of the uprights.

Other than getting winded and asking for a sub, Hunt ran with purpose and showed little rust in his first game in nearly one year. The 24-year-old acknowledged being emotional and nervous, but it didn't show.

Star defensive end Myles Garrett hasn't had a sack in two games, and he was credited with just one tackle Sunday. That's not to say Garrett wasn't disruptive, but he's not making the types of impactful, game-changing plays the Browns need.

Kitchens said his team came through the Bills game "pretty good for the most part." He added defensive end Olivier Vernon remains day to day with a knee injury sustained against Denver.

4 — A season low in penalties for the Browns, who averaged 10 infractions in their first seven games but have been flagged just nine times the past two weeks.

A short turnaround before hosting the Steelers, who are in the AFC playoff picture.