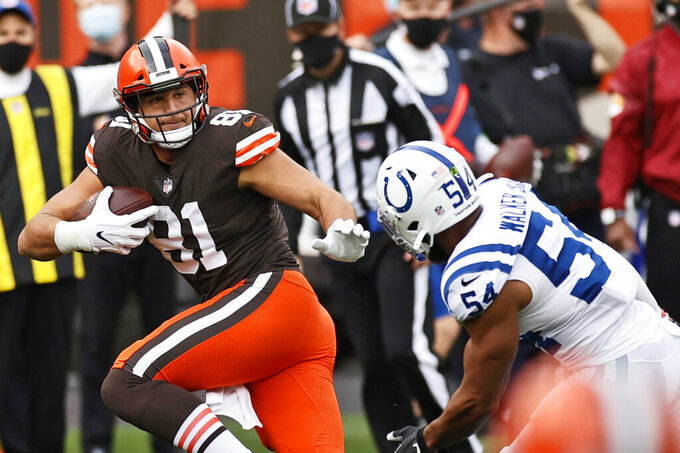 CLEVELAND (AP) — The Browns will be without dependable tight end Austin Hooper for Sunday's game against the Cincinnati Bengals after he underwent an appendectomy.

If Hooper has to be placed on injured reserve, he would automatically miss three games.

A two-time Pro Bowler in four seasons with Atlanta, Hooper has 22 catches for 205 yards this season. He's caught at least five passes in each of Cleveland's past three games and has been a key blocker for the Browns' league-leading rushing attack.

“Any success we have had this year, he has been heavily involved," Stefanski said. "It does not always show up in the stat sheets as catches, but he has been very involved in our successes this season. Obviously, we will miss him, but we will hold down the fort until he gets back.”

With Hooper out, Stefanski's rotation at tight end in Cincinnati will include rookie Harrison Bryant, David Njoku and Stephen Carlson.

Stefanski said quarterback Baker Mayfield has progressed from an injury to his chest and ribs sustained on Oct. 11 against Indianapolis. Mayfield winced in pain on several throws last week in a 38-7 loss to Pittsburgh.

Mayfield was limited in practice Wednesday, but has been a full participant the past two days.

“I think he is healthy,” Stefanski said of Mayfield, who threw two interceptions — one returned for a TD — last week. "He is not 100 percent, like talking about a lot of the guys. He is pushing through it. In Week 7, no one is feeling 100 percent. I have a ton of confidence in him. He has had a great week. I think he will be ready to go.”

The Browns have also ruled out starting right guard Wyatt Teller, who will miss his second straight game with a calf injury. Chris Hubbard will again take his spot.

Strong safety Karl Joseph (hamstring) was listed as questionable after missing the past two games.