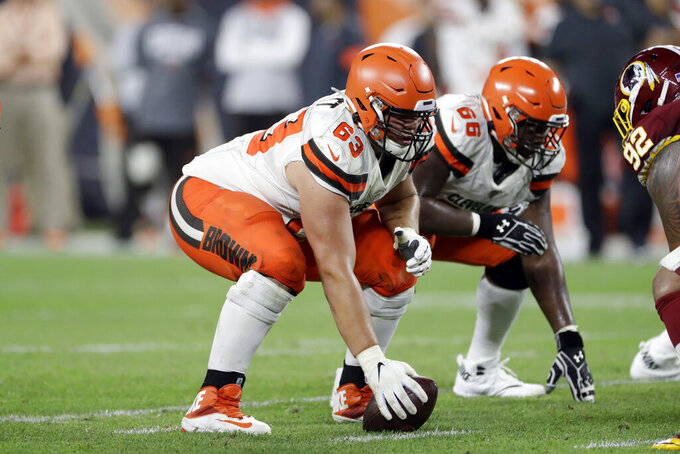 FILE - In this Aug. 8, 2019, file photo, Cleveland Browns center Austin Corbett (63) prepares to snap the ball during the second half of a preseason NFL football game against the Washington Redskins in Cleveland. The Browns traded Corbett on Tuesday, Oct. 15, 2019, to the Los Angeles Rams for an undisclosed 2021 draft pick(AP Photo/Ron Schwane)

The Browns traded Corbett, who failed to live up to high expectations after being selected with the No. 33 overall pick in the 2018 draft, to the Rams on Tuesday for a fifth-round draft pick in 2021.

Corbett was viewed as a potential long-term answer at left tackle when the Browns took him with the first pick of the second round — two before they nabbed star running back Nick Chubb. But Corbett hasn't developed as quickly as the Browns had hoped and general manager John Dorsey decided it was time to move him.

The 6-foot-3, 306-pounder played in 11 games as a rookie, making one start. Corbett appeared in three games this season.

Corbett was given a shot to win the starting job at right guard at training camp, but he was beaten out by Eric Kush. He's been listed as Cleveland's backup center behind JC Tretter.

Dorsey found a trade partner in the Rams, who have been in the market for a starting left guard since Joe Noteboom suffered a season-ending right knee injury during their loss to San Francisco on Sunday.

Los Angeles also needed to add some depth up front. Jamil Demby has been the sole backup at both guard spots, and he hasn't played particularly well in his chances to fill in for Noteboom and Austin Blythe.

The Rams' line was a durable strength of coach Sean McVay's offense during his first two seasons, but the entire group has taken a noticeable step back in 2019. Los Angeles elected to part ways with two key veterans — left guard Rodger Saffold and center John Sullivan — while replacing them with 2018 draftees Noteboom and center Brian Allen, but neither newcomer has impressed.