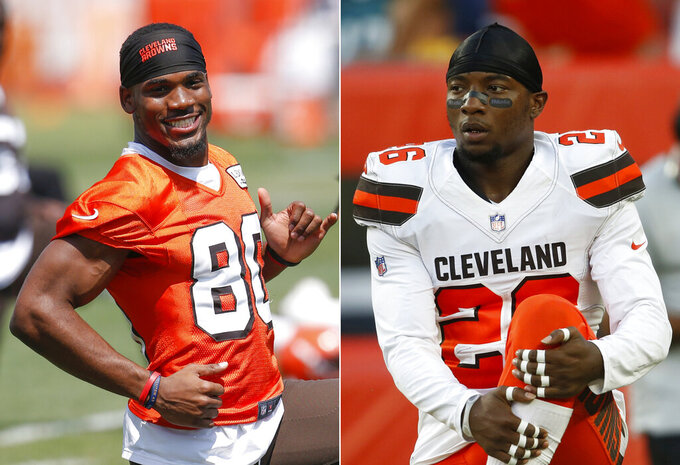 CLEVELAND (AP) — The Browns' draft class of 2016 is rapidly shrinking.

Ogbah did not report for the start of the Browns' offseason program Monday, a sign that a trade was being discussed. The 25-year-old was picked with the No. 32 pick three years ago by Cleveland.

He had 12½ sacks in 40 games but became expendable when the Browns acquired edge rusher Olivier Vernon from New York in the deal for Odell Beckham Jr.

Kindred and Louis were both selected in 2016 by Cleveland's previous front office, which drafted 14 players that year. Only three remain.

Dorsey has spent the past year and more fixing a roster that produced just one win over two seasons. But the Browns went 7-8-1 last season and expectations are soaring following the team's acquisition of Beckham and other offseason moves.

A fourth-round pick, Kindred had been expected to start after the Browns traded Jabrill Peppers to the Giants as part of the Beckham deal. Needing a safety, Dorsey went out and got Murray, whom he picked while he was the Chiefs GM in 2016. Murray became expendable when the Chiefs signed free agent safety Tyrann Mathieu.

The Browns were pleased with Higgins' development last season and feel he gives them depth at a key position. He had 39 catches for 572 yards and four touchdowns in 2018.

Coley has been a solid contributor over the past two seasons, starting 29 games.

Burris appeared in four games for Cleveland last season after being signed off the New York Jets' practice squad. Whitehead played on special teams in his seven games with Cleveland in 2018.