Browns try to stay in playoff hunt with win vs. Cardinals 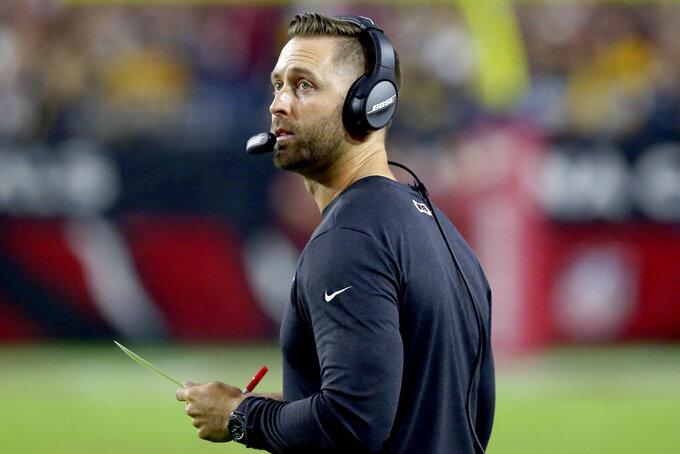 GLENDALE, Ariz. (AP) — Cleveland's Baker Mayfield might be headed for some relief in his up-and-down second season in the NFL.

Arizona's defense has made a lot of opposing quarterbacks look pretty good.

The Browns (6-7) will try to keep their playoff hopes alive and win for the fifth time in six games when they visit the Cardinals on Sunday. Mayfield hopes to play better than he did last week, when he completed just 11 of 24 passes for 192 yards and two interceptions in Cleveland's 27-19 win over Cincinnati.

“As long as we win, ultimately, that is the main goal, but you have to continue to work on that stuff, get the ball in our guys hands and let them make plays,” Mayfield said.

Arizona's defense is last in the league in yards allowed and passing yards allowed. The Cardinals have given up at least 21 points in all 13 games this season.

Arizona's Kyler Murray is looking to bounce back from his first three-interception game as an NFL quarterback. Murray has usually avoided big mistakes during his rookie season, but Sunday's three interceptions — all in the second half — were a big reason the Cardinals (3-9-1) lost their sixth game in a row.

“I think as a couple of these losses have stacked up, maybe (he’s) trying to do a little too much, trying to win it by himself,” Arizona coach Kliff Kingsbury said. "He’s got to get back in that rhythm like he was prior to the bye, where, ‘Hey, you’re just doing your job, executing at a high level and not trying to do too much.’ We’ll work through that.”

The rumors, rumblings and reports of Odell Beckham’s unhappiness in Cleveland aren’t going away any time soon. And while there’s smoke, it’s still not clear if there’s any fire.

Beckham has not said he wants to leave the Browns, but he hasn’t publicly stated that he’s planting roots either.

This week, coach Freddie Kitchens and several teammates said Beckham has not given them any indication he wants out. In fact, they claimed he has been engaged, motivated to win and seems to enjoy being part of the team’s rebuilding effort.

Mayfield was asked if Beckham, who has been dealing with a sports hernia injury for months, will be back for a second season with the Browns.

“I can’t answer that for him,” he said. “There are all the rumors going around, but I have had my conversations with him and I know what we talk about so I trust him wholeheartedly.”

Beckham’s injury has limited his production, but he has played in all 13 games and 96.4 percent of the snaps.

It has been a mostly disappointing season for Cardinals running back David Johnson, who hasn't had much of a role in the offense since returning from an ankle injury a few weeks ago. He did have a good moment against the Steelers last Sunday, catching a 24-yard touchdown pass to pull the Cardinals within 20-17 in the fourth quarter.

He hopes to have a bigger role in the offense going forward. Johnson has lost time in the running back rotation to Kenyan Drake — who was added by the Cardinals in a midseason trade with the Dolphins — and to a lesser extent Chase Edmonds.

“Any guy who's in the NFL wants to be on the field, so it's tough when you're not out there,” Johnson said.

Nick Chubb’s second season has been impressive. It may also be historic.

The Browns haven’t had an NFL rushing leader since 1968, when Hall of Famer Leroy Kelly gained 1,239 yards and scored 16 touchdowns. Chubb enters Sunday’s game with a league-leading 1,281 yards, but his only goal remains getting wins — not titles.

The unassuming Chubb said leading the league would be nice, but nothing he planned to do.

"It will mean a lot to me only because how hard I worked and it paid off for me,” he said. “That’s really the biggest thing for me is just when I work hard, it shows and I get the results that I want.”

Even at the age of 36, Arizona receiver Larry Fitzgerald is having another productive season.

He's leading the team with 64 catches for 669 yards. Fitzgerald hasn't committed to playing a 17th season, but Kingsbury said there's no doubt the team wants him back.

“You see what he’s done every week, and that’s with a young quarterback and with an offense that’s still learning how to play in the system,” Kingsbury said. "He’s as productive a player as we’ve had on this offense week-in, week-out, reliability and catching the football. He’s still a huge weapon for us, and I don’t see that changing.”

Browns defensive coordinator Steve Wilks was fired last year after just one season as the Cardinals coach. As he prepared to return to Arizona, Wilks said he’s not seeking revenge — simply a victory.

Wilks had numerous challenges during his first head coaching gig, but said they made him better.

“What I learned is just really how to deal with adversity as a head coach trying to prepare each and every week, trying to get your guys up to perform at a high level,” he said. “So it was difficult going through the struggles, but I thought the guys performed and played well and they stayed together throughout.”