Browns turned to Hunt to jump-start offense against Bears 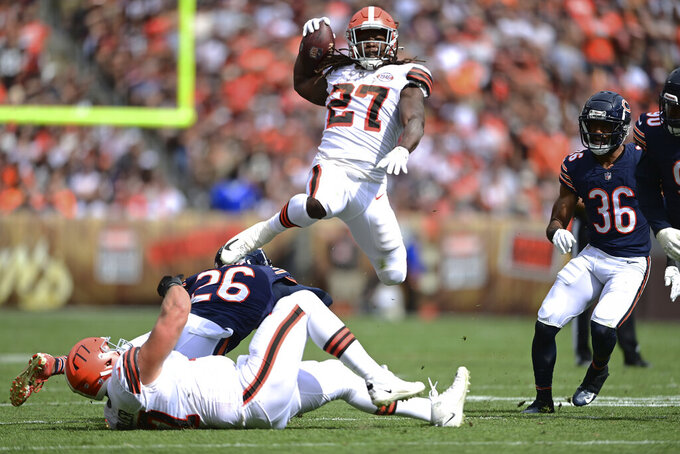 Cleveland Browns running back Kareem Hunt (27) jumps over players during the first half of an NFL football game against the Chicago Bears, Sunday, Sept. 26, 2021, in Cleveland. (AP Photo/David Dermer)

Hunt accounted for 155 yards and had perhaps his best game since coming back to his hometown while leading the Browns to a resounding 26-6 blowout of the Bears on Sunday.

On a day when Cleveland's defense dominated, the offense sputtered until Hunt got the Browns (2-1) going.

Hunt picked up 81 yards rushing, added 74 yards receiving and set the tone with a stop-me-if-you-dare attitude on a 29-yard touchdown run that helped seal one of Cleveland's most convincing wins in recent memory.

“He's a great back,” said Mayfield. "Just the look in his eye, everybody could tell the way he was running. It seemed angry — angrier than usual. When that happens, just find a way to get him the ball.”

Stefanski finally did that on Cleveland's third possession.

Hunt caught a short pass and turned it into an 18-yard gain and ripped off a 12-yard run as the Browns shook off those earlier missed chances to tie it 3-3 on Chase McLaughlin's 57-yard field goal.

“We certainly were leaning on him there in moments,” said Stefanski, who inexplicably left Hunt off the field on those early fourth downs.

Later, Hunt gained 41 yards on a drive that ended with Mayfield's TD pass to Austin Hooper and a 10-3 halftime lead.

Stefanski stayed with the hot hand and rode Hunt, who hasn't publicly complained about his touches. Cleveland's coach has looked to find the right balance for Hunt and running back Nick Chubb, the team's unquestioned workhorse, with mixed results.

For some reason, Hunt wasn't in as rookie Demetric Felton seemed to have a larger role in the first quarter. Felton may have been getting snaps that normally go to Jarvis Landry, who is out with a knee injury.

Maybe it was an oversight. Whatever the case, Stefanski can't afford to keep Hunt idle. He's far too valuable.

Stefanski didn't know if Hunt played more inspired because he was upset at not being in on the critical plays.

“I like an angry Kareem Hunt,” Stefanski said. “I'll make a mental note of that.”

Hunt is the perfect complement to Chubb, but he can also be the Browns' primary threat, capable of ripping off a big play at any time.

On Sunday, it came in the fourth quarter. On third-and-3 from the Chicago 29, Hunt stepped out of Deon Bush’s attempted tackle in the backfield, stiff-armed his way through a bevy of Bears and outran them to make it 20-6.

Hunt celebrated by launching himself into the first row of seats.

"I want to win, and I want to do whatever it takes to win.”

Stefanski needs to remember that.

Cleveland's defense showed up and quieted some detractors.

It's hard to find too much wrong at the moment, but Mayfield missed a couple of early throws that could have been big plays.

On Cleveland's first series, he overthrew Felton, who had gotten behind Chicago's defense and would have had an easy, long touchdown.

Rookie linebacker Jeremiah Owusu-Koramoah had his best game so far. He was credited with a half-sack, made four tackles and had two defensed passes.

Clowney had his first multi-sack game since Oct. 21, 2018, for Houston. He was also credited with five of the hits on Fields, who may have nightmares about the Browns' pressure for some time.

Tight end David Njoku was not targeted in his 50 plays.

Stefanski didn't provide an injury update on rookie cornerback Greg Newsome II (calf), who underwent an MRI on Monday. Stefanski said he would know more once the test results come back.

1 and 1: The Browns allowed Chicago to convert just once on third down in 11 tries. Going into the game, getting off the field had been a major problem for Cleveland's defense.

A homecoming for Stefanski, who takes the Browns to Minnesota next Sunday for the first of two straight road games. Stefanski spent 14 years with the Vikings, starting his NFL career as an administrative assistant in 2006.