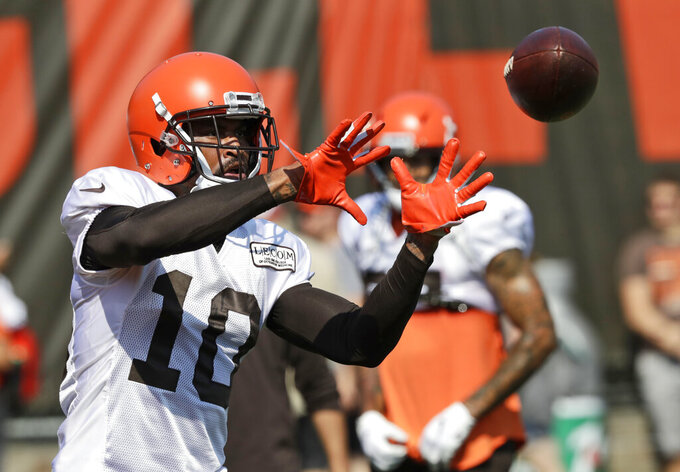 FILE - In this July 27, 2019, file photo, Cleveland Browns wide receiver Jaelen Strong catches a pass during practice at the NFL football team's training camp facility in Berea, Ohio. Strong has been waived by the Browns. Strong posted a thank you on Twitter to Cleveland fans on Monday, Aug. 26, 2019, saying the city will “always have a place in my heart.” The team is expected to make an official announcement Tuesday. (AP Photo/Tony Dejak)

CLEVELAND (AP) — Wide receiver Jaelen Strong has been waived by the Cleveland Browns.

Strong posted a thank you Monday night on Twitter, saying Cleveland will "always have a place in my heart." The team is expected to make an official announcement Tuesday.

The 26-year-old Strong was hoping to catch on with the Browns after missing all of last season following knee surgery. He had some impressive moments in training camp and the preseason, but Strong didn't play well in Friday's loss at Tampa Bay and the Browns felt he wasn't worth keeping on their roster.

A fourth-year pro, Strong played in 19 games for Houston and one with Jacksonville. He has 31 career receptions and four touchdowns.

His departure could open things up for receiver Braxton Miller, the former Ohio State quarterback signed by Cleveland last week.