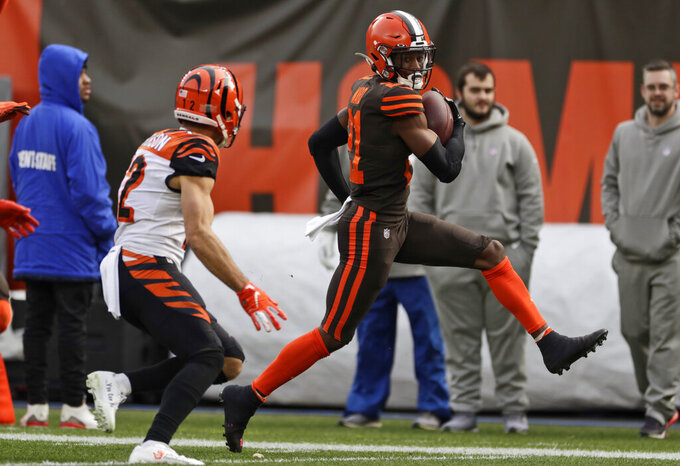 Cleveland Browns cornerback Denzel Ward scores on a 61-yard interception return during the first half of an NFL football game against the Cincinnati Bengals, Sunday, Dec. 8, 2019, in Cleveland. (AP Photo/Ron Schwane) 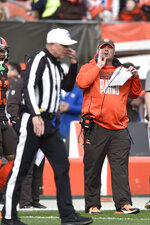 The Browns can't even win without some kind of theatrics,. And, once again, Odell Beckham is in the middle of the latest drama.

Nick Chubb ran for 106 yards — 99 after halftime — and Baker Mayfield and Kareem Hunt had rushing touchdowns as Cleveland kept its faint hopes alive Sunday with a 27-19 win over the Cincinnati Bengals, who outplayed the Browns but couldn't get their second win.

Denzel Ward returned an interception 61 yards for Cleveland's first score, and the Browns (6-7) got a huge late break when Mayfield's third interception was reversed with a rare interference call to bounce back after a discouraging loss at Pittsburgh last week.

“We came together as a team,” Mayfield said, “and this gives us some hope and positivity."

But as has been the case throughout this season of great expectations, the Browns couldn't avoid being dragged into more needless distractions.

Yet another episode broke out involving Beckham, their talented wide receiver whose arrival in March triggered unrealistic goals. Beckham's first season hasn't gone as planned and before the game, one report surfaced that he'll undergo offseason surgery to repair a sports hernia that has bothered him since training camp. Another report said he wants out of Cleveland.

Following the game, Beckham had little to say about either subject.

“I'm not going to talk about any offseason stuff that's going on,” he said. “I'm used to it. I've been dealing with if for three or four years. It's just the same thing that is going on. Not anything I can't handle.”

Beckham spoke softly in front of his locker before leaving FirstEnergy Stadium with his head covered by a hooded blue jacket. Earlier this week, the three-time Pro Bowler was vague about his future in Cleveland, fueling speculation he wants to be dealt for the second time in less than a year. He had just two catches for 39 yards.

"It wasn't handled right in our training room," Mayfield said. “I think it could have been addressed early on.”

Later, Mayfield attempted to clarify his remarks on Twitter.

“My intentions were not to throw our medical staff under the bus,” Mayfield wrote. “No I don’t know all the facts about Odell’s injury. It was emotionally answered because I can sense his frustration and I care about my team and putting us in the best position to win."

The Browns can still make the playoffs, but they need to run the table to have any chance of ending their 17-year postseason drought, the NFL's current longest.

“We are still fighting,” said wide receiver Jarvis Landry, who had four catches for 76 yards, including a late 34-yarder that helped put away the Bengals. “We are in it until they tell us we are out.”

The Bengals (1-12) couldn't build on their win last week over the Jets and have dropped 19 of 21 over the past two seasons.

Cincinnati running back Joe Mixon rushed for a career-high 146 yards and scored a TD. Bengals kicker Randy Bullock had field goals of 34, 44, 28 and 46 yards, the last with 12 seconds to go.

The Bengals outgained the Browns 451-333 and topped them in every statistical category but the final score.

“We should’ve won that game, but the best thing about it is we get to see them in three more weeks in Cincinnati," Mixon said. "They’ve got to come to us. I’m excited and I can’t wait.”

Mayfield appeared to throw his third pick with 4:58 left when cornerback William Jackson III tipped a pass intended for Beckham and it was grabbed by Jessie Bates III and returned inside the 20. But Browns coach Freddie Kitchens challenged that Beckham was interfered and won the review.

For some reason, Kitchens decided not to run the ball in the first half despite having the NFL's leading rusher (Chubb) and facing the league's worst run defense. Cincinnati came in allowing 157.6 yards per game. Cleveland had just 30 yards rushing at halftime with Chubb getting only 7 on three carries.

That changed immediately in the third quarter. Cleveland came out with a 75-yard drive — all on the ground.

Cincinnati had numerous chances to get its second win, but came up short.

“We had the look that we wanted for it,” said Dalton, who went 22 of 38 for 262 yards. "Obviously, it didn’t turn out how we thought it was going to, but it was the right call for that look. Unfortunately, they played it well, and we weren’t able to get in.”