Bruised Bears could be without Smith, Mooney against Saints 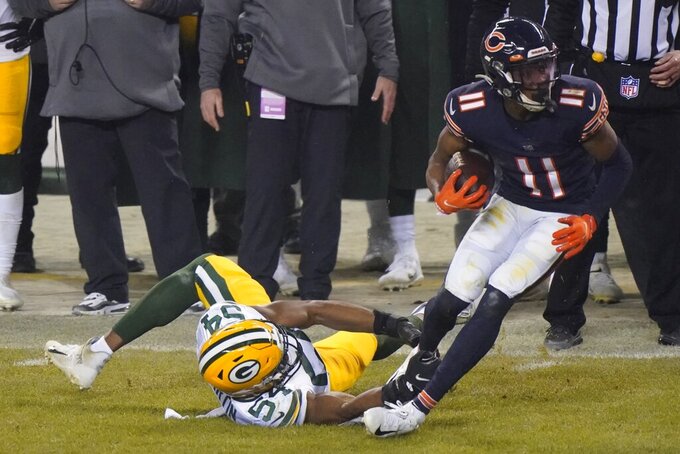 The Chicago Bears got the help they needed to make the playoffs for the second time in coach Matt Nagy's three seasons.

They might not have the health they need to stick around.

The Bears could be down two important players when they visit Drew Brees and the New Orleans Saints for a wild-card game on Sunday, with inside linebacker Roquan Smith and receiver Darnell Mooney injured.

Both players missed the team's walkthrough on Wednesday after leaving last week's loss to Green Bay, and coach Matt Nagy had little to say about their status.

“We don’t have any clarity yet,” Nagy said.

The Bears (8-8) would be hard-pressed to beat the NFC South champion Saints (12-4) even at full strength. But with Smith and Mooney out, their task would be that much tougher.

Smith, Chicago's leading tackler, went out with a left elbow injury on Green Bay's first possession while Mooney left in the fourth quarter with an ankle injury.

The Bears (8-8) went on to lose the game 35-16. But they made the playoffs for the second time in Nagy's three years because the Arizona Cardinals lost to the Los Angeles Ram s.

That would have been difficult to envision not too long ago.

The Bears lost six straight following a 5-1 start in their worst skid since the 2002 team dropped eight in a row. They jumped back into contention by beating three struggling teams before dropping the regular-season finale. And they became the third team since the 1970 merger to lose six straight and make the playoffs.

The Bears also benched quarterback Mitchell Trubisky in favor of Nick Foles during a comeback win at Atlanta in Week 3. They switched play-callers on offense, with Nagy handing off those duties to coordinator Bill Lazor in an effort to lift a struggling group. And they went back to Trubisky in Week 12 with the struggling Foles injured.

Yet, they still found a way to the playoffs — even if it was through the back door.

“We know everybody is overlooking us,” Trubisky said. “I think we’ve been just playing with that edge, that chip on our shoulder. We don’t have anything to lose. We should go out there and play free.”

If few outside Halas Hall think the Bears have a chance against New Orleans, well, Nagy can see why.

“We understand people have opinions, but at the same time, we’re gonna do what we know, and that’s to believe in one another and play hard for each other,” he said.

It would help if they weren't banged up.

Smith's injury could leave the Bears more vulnerable against star running back Alvin Kamara, assuming he comes off the COVID-19 list. If Smith — who had a career-high 139 tackles and ranked second in the league with 18 for loss — is unavailable, Josh Woods could make his first NFL start. The third-year pro played 28 snaps.

Mooney, the Bears' second-leading receiver, set career highs with 11 catches for 93 yards against Green Bay. The fifth-round draft pick from Tulane ranked fifth among NFL rookies in receptions with 61 for 631 yards and overtook Anthony Miller as Chicago's No. 2 wide receiver.

Miller's production dropped in his third season. He had 49 receptions for 485 yards compared to 52 for 656 yards in 2019. He had seven games with two receptions or fewer.

“We’ve got a lot of great players,” star receiver Allen Robinson said. “We have players that have played a lot of football here. ... I like the depth we have in our room, and I think guys have come in each and every week and challenged themselves to get better and be available for any opportunity or anything like that.”