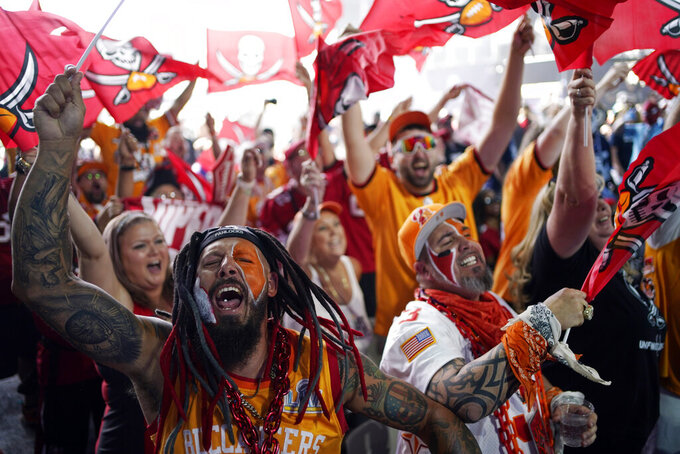 TAMPA, Fla. (AP) — If the Tampa Bay Buccaneers drafted as well as they think they did, Tom Brady’s supporting cast will be better next season.

While the defending NFC South champions once again figure to be a veteran-laden team not counting on rookies to shore up glaring weaknesses, vice president of player personnel John Spytek believes this year's draft class can help make a difference.

“They’re going to get every opportunity to,” Spytek said Saturday, but added that, for the second straight year, it’s nice to be in a position where the Bucs aren’t relying on draft picks to fill holes on offense and defense.

In 2021, the Bucs returned all 22 starters from a roster that won the Super Bowl the previous season. They haven’t been able to replicate that this offseason, however most of the lineup remains intact as the team — and Brady — prepare to pursue another championship.

After trading out of the first round Thursday night, the Bucs selected Houston defensive tackle Logan Hall and Central Michigan guard Luke Goedeke in the second round. Versatile Arizona State running back Rachaad White was the pick in Round 3.

Depending on whether general manager Jason Licht winds up re-signing free agents Ndamukong Suh and/or Rob Gronkowski, there could be some interesting competition for a couple of jobs in training camp. Hall could challenge Suh for the starting defensive line spot he's held the past three seasons and Otton could be in line for playing time at tight end.

Gronkowski, lured out of retirement and obtained in a trade after Brady signed with the Bucs two years ago, has said he’s going to take his time deciding whether he wants to return to the field.

Licht said Friday that the status of the longtime Brady teammate would not affect Tampa Bay’s draft strategy.

“I’m still giving him that time. We still talk. I think it didn’t matter if we drafted two tight ends. It wouldn’t matter,” Licht said. “I think Rob welcomes that. The more the merrier for him. So that doesn’t show our hand on or foretell what’s going to happen in the future.”

Camarda, meanwhile, may have as good a chance as any of the newcomers to have an impact right away. His selection as the second of two Round 4 picks signals that veteran punter Bradley Pinion’s days with the Bucs could be numbered.

In addition to averaging a career-low 42.5 yards per punt last season, Pinion’s scheduled salary of $2.9 million for next season is not guaranteed.

The Bucs added eight players — four on offense, three on defense and a punter. While they didn’t necessarily have any pressing needs entering the draft, they were able to bolster depth on the defensive and offensive lines, as well as at running back and in the secondary.

Camarda was one of three punters drafted in the first six rounds.

“He fits a lot of what we’re looking for,” Spytek said, adding the fourth-round pick has an incredibly strong leg that was a game-changer at Georgia.

Camarda won the starting punting job as a freshman and last season helped the Bulldogs win the national championship. He feels all the big-time games he appeared in during his college career will help him in his transition to the NFL.

“I think it has certainly prepared me for the next level, playing at Georgia for four years, playing in every single biggest game you can possibly imagine,” Camarda said.

McCollum impressed the Bucs at the Senior Bowl and said he was told by one of the team scouts that if he was able to run a sub-4.45 second 40-yard dash at combine, “then we’re going to draft you.”

“The interview went really, really well. They liked me and the way that I talked — my intelligence and what I’ve done in terms of production. But there were just a couple things that I needed to do on my own to prove myself,” McCollum said.

“I think the night I had that performance at the combine, they texted my agent and said, ‘Zyon McCollum is going to be a Buccaneer.’ There were just so many things that had to go on when it comes to Zoom meetings and (draft prospect) meetings and all that, so I just took it with a grain of salt,” he added. “But it actually came true. They weren’t lying.”