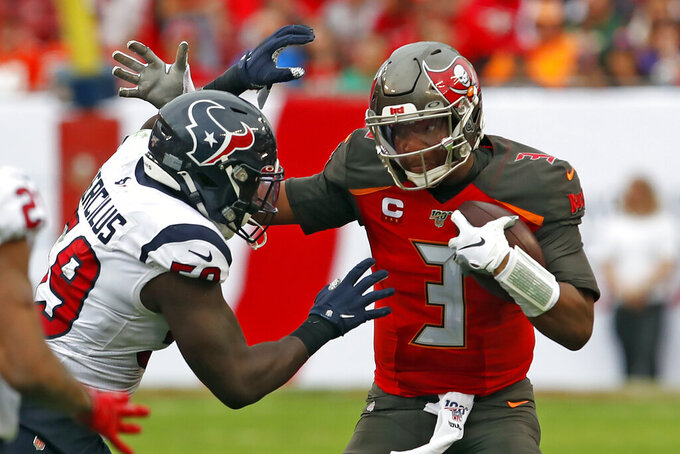 TAMPA, Fla. (AP) — The winner will finish second in the NFC South.

That’s enough to keep the Tampa Bay Buccaneers (7-8) and Atlanta Falcons (6-9) motivated for the final game of a season in which neither team will finish with a winning record.

“For us 8-8, tastes a whole lot better than 7-9,” coach Bruce Arians, completing his first season with the Bucs, said. “Any time you can spend the offseason remembering when you won, it’s a lot different to come to work every day — as a player and a coach.”

“I don’t worry about all of those other things as much as just trying to get the job done this week,” Atlanta quarterback Matt Ryan said. “We know we are playing a good team, a team that is playing really well. Their second half of this season has been very similar to ours. They have been operating at a very high rate ... and that is what we are focused on.”

The Bucs, also 5-2 over their past seven games, are a year removed from their fifth coaching change in a decade. They’ve already surpassed their victory total for each of the past two seasons, when they went 5-11.

Quinn took the Falcons to the Super Bowl for the 2016 season, but hasn't come anywhere close to replicating that success. Win or lose Sunday, Atlanta will finish with a losing record for the second straight season.

Nevertheless, Arians is impressed with the way the Falcons have performed down the stretch.

“There’s (an) accountability factor. They want to win for Dan. Dan’s a heck of a coach, heck of a guy, so they’re giving it everything they’ve got,” the Bucs coach said. “Defensively I think they were simpler and playing faster the last time we played them. They’ve gotten a little more complicated and they’re still playing fast.”

Tampa Bay won a matchup between the division rivals 35-22 on Nov. 24. A Falcons win this time would leave both teams at 7-9, however, Atlanta would finish in second place because of a better record within the NFC South.

“It’s for second place in the division,” Tampa Bay quarterback Jameis Winston said of what it would mean to close on a positive note. “We’re going to go out there and try our best to play good football because they’ve been playing really good football. ... 8-8 is better than 7-9 any day.”

Falcons offensive coordinator Dirk Koetter, the Bucs' head coach for three years before getting fired last Dec. 30, is trying not to put too much emphasis on returning to Raymond James Stadium. Koetter went 19-29 at Tampa Bay and lost his job after consecutive 5-11 seasons.

“It’s part of the business," Koetter said. “I’m sure it will be a little weird on game day, but as we stand here today you are just digging into the film and trying to figure out how to attack that defense because they are playing really, really good on defense right now.”

Another former Tampa Bay head coach, Raheem Morris, has been on the Atlanta staff since Quinn's first season in 2015. Morris switched from receivers coach to the secondary seven weeks ago and has helped spark a defensive turnaround in the second half of the season that has earned him the defensive coordinator job in 2020. Morris went 17-31 at Tampa Bay from 2009-11.

Tampa Bay sacked Ryan six times for minus-46 yards in Week 12, and it was a big day for the linebackers. Lavonte David, Devin White and Shaquil Barrett combined for 13 solo tackles, seven quarterback hits and three sacks for minus-27 yards.

Atlanta's offensive line can't afford another poor performance, though Ryan has been encouraged the last three weeks with the return of guard Chris Lindstrom, a first-round draft pick who missed 11 games with a broken foot. Lindstrom has helped stabilize the right side of the line, complementing fellow rookie tackle Kaleb McGary.

McGary struggled badly against White in the last matchup.

“I think for us the offensive line has had good continuity for the last couple of weeks," Ryan said. “We have got some different guys playing than we did the first time and it starts and ends there. We have to make sure we play well up front.”

Seven-time Pro Bowl receiver Julio Jones has found ways to get better as a leader during Quinn’s tenure, and Jones keeps racking up big numbers on the field. Last week he became the quickest NFL receiver to 12,000 career yards, reaching the mark in 125 games, and he’s the first receiver to have five straight seasons of at least 1,400 yards and 80 catches.

“He's always been revered as a ballplayer on the team, but the leadership has just grown as he's grown, and I think that to me speaks a lot,” Quinn said. “Not only does he impact the other players on the offense, but on the entire team. He's always pushing the guys and kind of giving a model of what it could look like. I think that part of his game, he's always been a fantastic player and teammate, but now leading is kind of the last bit of icing that I've seen, and it's very impressive.”