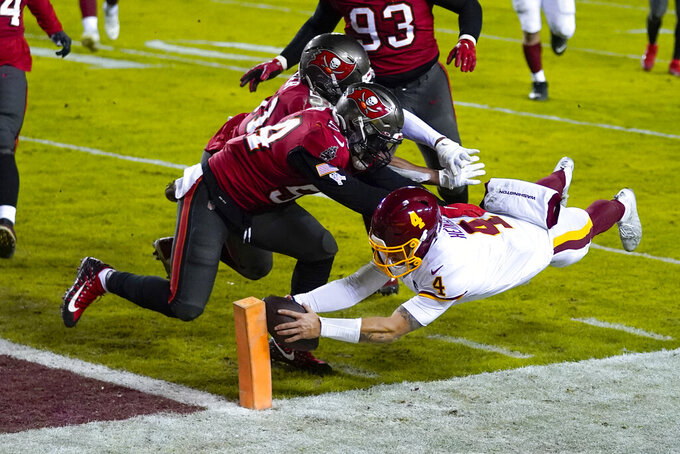 FILE - Washington Football Team quarterback Taylor Heinicke (4) dives to score a touchdown against Tampa Bay Buccaneers inside linebackers Kevin Minter (51) and Lavonte David (54) during the second half of an NFL wild-card playoff football game, Saturday, Jan. 9, 2021, in Landover, Md. The Tampa Bay Buccaneers return to where their playoff run to the Super Bowl started when they visit Washington. The Buccaneers are a 9½-point favorite. But Brady says he and his teammates cannot just expect to walk onto the field and win. (AP Photo/Julio Cortez, File)

Losing six of eight games this year has washed away most of Washington's optimism in the wake of that close defeat with little hope of salvaging 2021. The 6-2 Buccaneers are rolling and trying not to take what should be an easy victory Sunday for granted. FanDuel Sportsbook has them as 9½-point favorites.

“There’s no guarantees in the league here,” Brady said. “There's no easy games. You can't roll your helmet out there and think you’re going to win.”

Washington gave Tampa Bay a bit of a scare in January, starting Taylor Heinicke at quarterback in place of injured veteran Alex Smith and sacking Brady three times but falling short 31-23. Heinicke is back as the starter without the element of surprise this time — after his performance with one passing and one rushing touchdown earned him a two-year contract.

“He can play, he can run and he threw some great balls in that game," Buccaneers coach Bruce Arians said. "I think that team plays really, really hard for him, and I like the way he plays.”

Heinicke's play has been up and down, and so has Washington's defense, which has been unable to live up to lofty expectations. The team didn't take the lessons from winning the NFC East and losing to Tampa Bay in the playoffs that coach Ron Rivera wanted.

“You got to work your way back up to there,” Rivera said. “That’s probably my biggest frustration: that in spite of the expectations, I just kind of had a feeling that we felt we were going to be able to pick up right up here, and that’s not how it works in this league.”

The Buccaneers have. They started 6-1 before losing at New Orleans going into their bye and have handled a spate of injuries on each side of the ball.

But Brady said, “I don't think there's one area we can't be better,” and his teammates are focused on responding to that 36-27 loss to the Saints.

Considering all Brady has accomplished during an unparalleled 22-year career, it’s not surprising he has fared very well with an extra week to prepare for an opponent. In 21 starts following a regular-season bye, he’s 16-5.

The Bucs lost three of four games and took a 7-5 record into their bye last season. They returned to go 8-0 down the stretch, including their three playoff road wins and a rout of Patrick Mahomes and the Kansas City Chiefs in the Super Bowl.

The Bucs lead the NFL in passing offense (327.5 yards per game) and scoring (32.5) with Brady throwing for 2,650 yards and a league-high 25 touchdowns through eight games. The 44-year-old has a plethora of playmakers at his disposal, including receivers Mike Evans, Chris Godwin and Antonio Brown and tight ends Rob Gronkowski, O.J. Howard and Cameron Brate.

With Gronkowski (ribs) and Brown (ankle) sidelined by injuries, the defending champs bolstered their depth by adding two veterans — receiver Breshad Perriman and tight end Darren Fells — to the practice squad this week.

Coach Bruce Arians said there was no interest in pursuing Odell Beckham Jr.

Another difference since these teams' playoff game is Tampa Bay sticking with kicker Ryan Succop, while Washington is on to a second replacement for Dustin Hopkins. The team cut Chris Blewitt this week and brought in Joey Slye, who knows Rivera from their time together in Carolina.

Slye grew up in a military family moving around from place to place, which prepared him for life as an NFL kicker.

“When you sign up to be a kicker, you know you sign up a little bit to bouncing around a little bit until you find a steady home,” he said. “Been living in hotel rooms for the past couple months. DoorDash has been a great friend of mine recently.”

Slye returns to the area he grew up in carrying a reminder of his days playing high school football in Virginia. Tattooed on his right arm is a rendering of him and brother A.J. from the last game they played together.