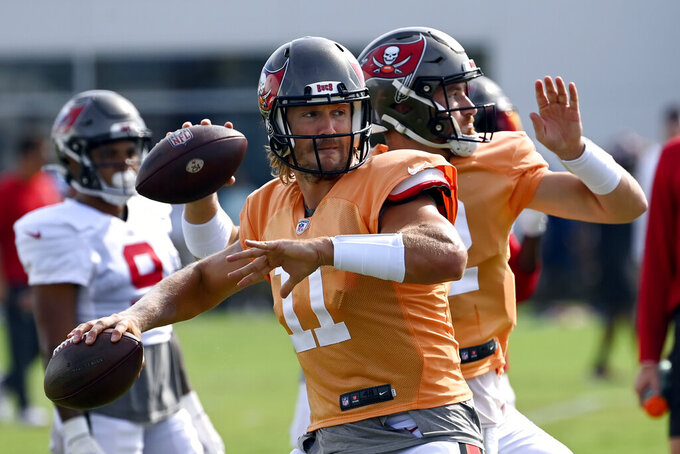 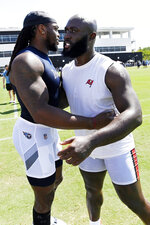 NASHVILLE, Tenn. (AP) — The Tennessee Titans must decide if rookie Malik Willis gets a second straight preseason start knowing exactly what they have in veteran Ryan Tannehill.

The Tampa Bay Buccaneers have Tom Brady, who is due back soon from a personal break from training camp, though coach Todd Bowles said Thursday he has no specific date for the quarterback's return.

“We'll see,” Bowles said. "We’ll talk about it next week. I'm not concerned about it right now. We're trying to practice against Tennessee and play a game. I said sometime after Tennessee. There's no definitive date for me. But we'll check on it. We'll keep in touch and we'll find out.”

Brady hasn't practiced with the Bucs since being excused Aug. 11 for what Bowles called a planned absence from the team to address “personal things.” Bowles said then that the 45-year-old quarterback's break from practice was arranged before camp opened and that he wouldn't return until after the exhibition against Tennessee (0-1).

Brady didn't play in the Bucs' preseason opener, a loss to Miami. Veteran Blaine Gabbert started, with Kyle Trask, their second-round draft pick in 2020, getting much of the work.

Gabbert had a pass batted down by Titans defensive tackle Jeffery Simmons on Thursday before being picked off by Titans cornerback Caleb Farley in a 2-minute drill to end practice.

Bowles said the extra work with Brady out has been great for Gabbert mentally.

Tannehill also didn't play when the Titans opened the preseason by losing in Baltimore.

Willis, the 86th pick overall out of Liberty in the April draft, got the start ahead of Logan Woodside, who has been Tannehill's backup the past two seasons.

Coach Mike Vrabel hasn't made a decision on who starts next but made it clear the Titans want to see as much as possible out of Willis.

It's why Willis has been getting more work with the second-team offense in 2-minute drills at Woodside's expense, which continued Thursday. Willis has turned the fight for the backup job into a real competition.

“We have to continue to develop Malik in this system, and we’ve had conversations with Logan about his opportunity to compete," Vrabel said. "But I also feel like we have to try to see how quickly we can bring Malik along. And I think that would be the reason why.”

Brady won't be the only one not playing for the Bucs on Saturday night. Bowles said wide receiver Julio Jones, who practiced both Wednesday and Thursday, against his old team won't play. Wide receivers Mike Evans, Chris Godwin and Russell Gage didn't practice at all in Nashville as they recover from injured hamstrings.

NOTES: Practice ended with a fight as Bucs running back Leonard Fournette came over to punch Simmons, who responded. Vrabel got in the middle to help break it up. Bowles said it was unfortunate the last play turned into a skirmish after good work against the past two days. Vrabel said it was a prime example of players doing dumb stuff to hurt the team. ... Derrick Henry worked in individual drills, then went to the sand pit as part of the Titans' plan for the two-time NFL rushing leader. ... Bucs right tackle Tristan Wirfs also left practice early with a trainer. ... Titans rookie WR Treylon Burks practiced Thursday after leaving Wednesday's session early, and he wore a sleeve on his left leg.