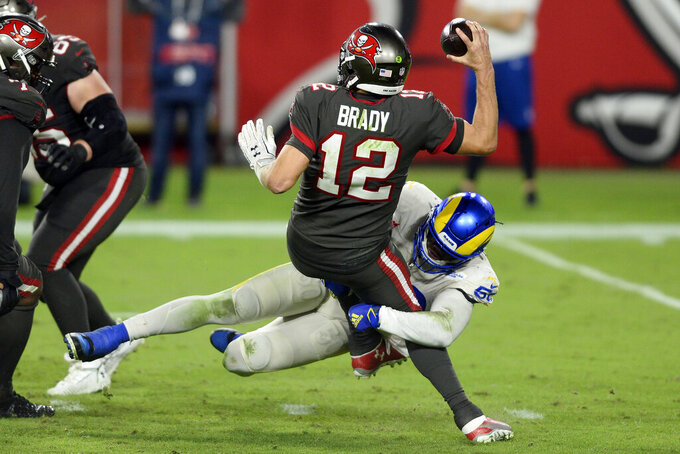 TAMPA, Fla. (AP) — Tom Brady and the Tampa Bay Buccaneers are searching for answers for their inconsistency.

The team’s prime-time woes continued with a 27-24 loss to the Los Angeles Rams, however what's been even more curious during a stretch in which the Bucs (7-4) have played four night games is Brady hasn't played well in any of them.

Three of the team’s four losses have come under the lights on the road against Chicago and at home against NFC South leader New Orleans and the Rams, who share the best record in the NFC West.

The Bucs also struggled before holding off the New York Giants for a narrow victory in their other prime-time appearance.

Coach Bruce Arians is at a loss to describe the inconsistency, which has ranged from impressive performances in wins over Green Bay and Las Vegas to a pair of lopsided losses to the Saints. Seven of Brady's nine interceptions have come in three games against the Saints and Rams.

“I’m still trying to figure that out,” Arians said. “At times we look really, really good and then there are times where we obviously don’t.”

Brady didn’t provide much more insight after going 26 of 48 for 216 yards, two touchdowns and a pair of costly interceptions in Monday night's loss to the Rams.

Rookie Jordan Fuller had both interceptions for Los Angeles, which — like New Orleans, Chicago and New York in the other prime-time matchups — was able to disrupt the 43-year-old quarterback with a strong pass rush.

The Rams only sacked the six-time Super Bowl champion once, but they pressured and hit him all night long.

“Just a bad read,” Brady said of the clincher, which was intended for tight end Cameron Brate, but instead went straight to the Rams safety.

“Cam was running up a seam and at the last second I saw the safety coming over and just popped it over Cam’s head,” Brady added. “Just a bad read, a bad throw, decision — everything. Can’t happen.”

Things don’t get any easier this week, with the reigning Super Bowl champion Kansas City Chiefs headed to town.

The Bucs haven’t made the playoffs since 2007, a 12-season drought that’s the second longest in the league.

It’s why they pursued Brady in free agency and then added veterans Rob Gronkowski, Leonard Fournette, LeSean McCoy and Antonio Brown to an already impressive group of playmakers on the roster.

“Like they told us last week, every game is like a playoff game and that mentality we have to take it during this week,” safety Jordan Whitehead said.

“It’s hard to lose an NFC game and we just have to bounce back. We have another one next week, another tough one,” Whitehead added. “We just have to learn ... and go the next one.”

It wasn’t easy to watch Gay, a fifth-round draft pick by the Bucs in 2019, kick two field goals, including the game-winner for the Rams. Tampa Bay released him in training camp to clear the way for Ryan Succop to handle the job this season.

Gay missed eight field goals and five extra points during an inconsistent rookie year. He signed the Rams just last week, replacing injured Kai Forbath, and converted kicks of 38 and 40 yards while missing a 44-yarder in his Los Angeles debut.

In fairness to the Bucs, Succop has been outstanding since joining Tampa Bay. He’s 21 of 23 on field-goal attempts and has made all his kicks inside 40 yards — a distance Gay struggled from a year ago.

Brady has struggled throwing the deep ball the past two games. Despite shredding Carolina in a 46-23 victory, he missed several open receivers deep against the Panthers. His longest completion went for 18 yards to Mike Evans on Monday night.

“We’ll study it. Again, we’ve had some chances — definitely,” Brady said. “The receivers are doing a great job and I’ve got to get them the ball. Got to figure out how to do that.”

Brown is gradually getting more involved in the offense. He was targeted 13 times in his third game since joining the Bucs after serving an eight-game suspension for violating the NFL’s personal conduct policy. He had eight receptions for 57 yards, both team highs against the Rams.

The defense could not contain the Rams’ short passing game, allowing Jared Goff to throw for 376 yards and three touchdowns without a sack. Whitehead and Jason Pierre-Paul had interceptions to set up 10 second-half points, however Los Angeles receivers Robert Woods and Cooper Kupp combined for 23 catches for 275 yards.

Cornerback Jamel Dean left Monday night’s game with a concussion. His status for this week is uncertain.

42, as in yards rushing vs. the Rams. That’s after topping 200 the previous week against Carolina. Ronald Jones followed up a 192-yard outing against the Panthers with 24 yards on 10 carries. Leonard Fournette gained 17 on seven attempts.

The Bucs host Patrick Mahomes and the Chiefs (9-1) on Sunday.

“We’ve got to get ready to play a great football team coming up,” Brady said.

“Nothing has been great to this point. We’ve had some good wins, had some tough losses,” Brady added. “Everything is about one week here in the NFL. We’re going to have to go play really, really well against a great football team next week.”