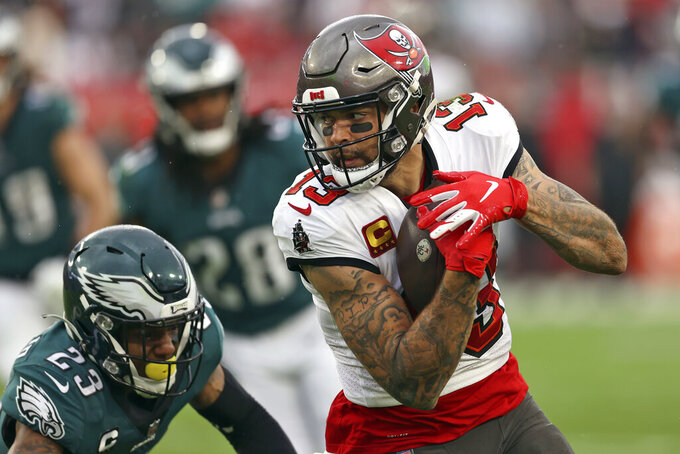 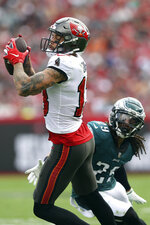 TAMPA, Fla. (AP) — Mike Evans has no interest in debating where he ranks among the NFL’s best pass catchers.

The only receiver in league history to begin a career with eight consecutive 1,000-yard seasons is comfortable with who he is, as well as his value to Tom Brady and the defending Super Bowl champion Tampa Bay Buccaneers.

“I’m just happy to be in the NFL. To break records, and break my own records, it’s a true blessing and I don’t take it for granted,” Evans said. “I come in each year and work my tail off and try to be the best that I can be.”

Despite a sore hamstring that sidelined him one game and part of a second, the 28-year-old Bucs star finished the regular season with 74 receptions for 1,035 yards and a franchise-record 14 touchdowns.

Hall of Famer Randy Moss is the only other receiver to start a career with at least six straight seasons with more than 1,000 yards.

And since entering the NFL as the seventh overall pick in the 2014 draft, he leads the league with 75 TD receptions, two more than Green Bay’s Davante Adams. He’s third over that stretch in receiving yards at 9,301 yards, trailing Julio Jones (10,593) and Hopkins (9,779).

“Mike is as special as it gets. And, I still think he’s underrated to most people,” Bucs offensive coordinator Byron Leftwich said. “What he’s done in such a short period, that seems quick.”

The three-time Pro Bowl selection's accomplishments went largely unnoticed early on, mostly because he joined the Bucs during a stretch in which the team missed the playoffs 12 consecutive years.

That ended with the arrival of Brady, who in part chose to sign with Tampa Bay in 2020 because of the presence of a young, talented group of playmakers that included Evans, receiver Chris Godwin, running back Ronald Jones and tight ends Cameron Brate and O.J. Howard.

The Bucs added tight end Rob Gronkowski, receiver Antonio Brown and running back Leonard Fournette to the mix and not only stopped the long playoff drought, but finished last season on an eight-game winning streak that included three playoff road wins and a rout of Patrick Mahomes and the Kansas City Chiefs in the Super Bowl.

Evans, who had nine catches for 117 yards and a touchdown in last week’s 31-15 wild-card win over Philadelphia, is excited about having an opportunity to face a team that not only defeated Tampa Bay in September but last season as well.

“We know postseason is a whole different ballgame. Everybody’s straining to make sure they’re playing the next week,” Evans said.

“I always like playing a team that beat us. ... Last year we played the Saints (in the divisional round). I wanted to play them because they beat us twice during the regular season,” the 6-foot-5, 231-pound receiver added. “I wanted to play them again this year, but it didn’t work out that way.”

The Saints, who swept the season series between the NFC South rivals again in 2021, didn't make the playoffs.

The Rams, who advanced with a lopsided wild-card victory over Arizona, beat the Bucs 34-24 at home in Week 3.

“They have a lot of superstars on that defense, a lot of great players. They always play hard, communicate well, tackle well, bring a lot of energy, talk trash. They’re a really good defense,” said Evans, who had eight catches for 106 yards but no TDs during the loss in Los Angeles on Sept. 26.

With Godwin (98 receptions, 1,103 yards) out since suffering a season-ending knee injury in Week 14, Brady has kept the league’s top passing attack on track by leaning more heavily on Evans and Gronkowski, as well as backup receivers Breshad Perriman, Tyler Johnson Cyril Grayson, and Scotty Miller.

Evans was targeted 10 times against the Eagles, with the lone incompletion an end zone throw the receiver felt he should have caught for a second touchdown.

“It’s all about winning,” Arians said.

“He is one of the best teammates out there, steps up to the plate when his number is called,” Gronkowski added. “It is an honor to be his teammate ... great to be on his side.”

Evans, a three-time nominee for the NFL's Walter Payton Man of the Year award, insists he’s simply doing his job.

“I just do what I’m asked. Coach, Tom, they all put me into position to try to make a play, and I’ve got to do my best to do it,” Evans said. “No matter what the coverage is, if the ball comes my way, I’ve got to make the play and do my best to get open.”