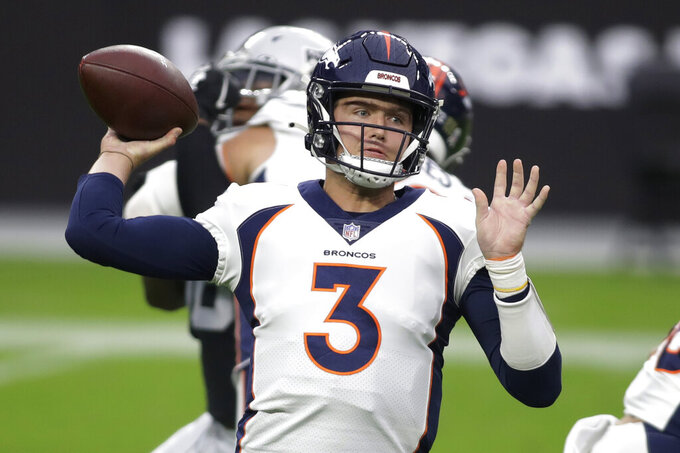 FILE - In this Nov. 15, 2020, file photo, Denver Broncos quarterback Drew Lock looks to throw against the Las Vegas Raiders during the first half of an NFL football game in Las Vegas. Lock is already on his second offensive coordinator and second quarterbacks coach in just his second NFL season, and this week he made a pitch for OC Pat Shurmur and his position coach Mike Shula to return in 2021. (AP Photo/Isaac Brekken, File)

DENVER (AP) — Josh Allen has gone from an erratic rookie quarterback from Wyoming to a precision passer in his third NFL season, leading the Buffalo Bills to the cusp of their first AFC East title in a quarter century.

Watching film of the Bills (10-3), the Denver Broncos (5-8) caught a glimpse of what they hope is their own future with erratic quarterback Drew Lock.

Allen, who barely completed half of his passes as a rookie, is close to a 70% passer now and he has a franchise-record 35 combined touchdowns and just nine interceptions with three games remaining beginning Saturday at Empower Field.

“He’s having a hell of a season,” Broncos coach Vic Fangio said. “He’s a big, strong guy who can run. He’s tough to tackle in the pocket and he’s tough to tackle when he breaks out of the pocket. ... The guy has really emerged as one of the top quarterbacks in the league.”

Allen credits continuity for his metamorphosis in Buffalo, where Sean McDermott has been his head coach and Brian Daboll his offensive coordinator ever since he was the seventh overall selection in the 2018 draft.

“I think it would have definitely made it more difficult” not to have that stability, Allen said. “Having the same verbiage and concepts and the relationships I do with Daboll has been extremely helpful. Scheme-wise, knowing my protections, knowing the concepts that I like and Daboll understanding the concepts I don’t like, if we had to switch it up, it’d be tough.

“Nobody likes to be thrown in a new system, especially if you feel comfortable with the one you’re in now. I’m thankful we’ve had the same guys for the last three years.”

Lock is already on his second offensive coordinator and second quarterbacks coach in just his second NFL season, and this week he made a pitch for OC Pat Shurmur and his position coach Mike Shula to return in 2021.

“That’d be awesome,” said Lock, who’s had six offensive coordinators in seven years going back to his time at the University of Missouri, including Rich Scangarello last year. “I feel like having the same play-caller in this organization for more than one year would be huge for us.”

Lock is coming off his best game as a pro, a four-touchdown, no-interception masterpiece at Carolina in which he posted an NFL-best 149.5 passer rating.

With Saturday’s game marking his 16th start in the pros, Lock’s statistics look like this: an 8-7 record with 20 touchdown throws, 16 interceptions and a 59.5 percent completion rate.

After the Broncos were forced to play the Saints without any of their four QBs last month, they made sure they wouldn’t be caught similarly ill prepared should K Brandon McManus end up sidelined by COVID-19.

They signed 31-year-old rookie Taylor Russolino as their quarantined kicker/punter, and he’ll be suited up Saturday with McManus on the COVID-19 list as a close contact.

The Broncos have to face Stefon Diggs and Cole Beasley with a cobbled-together CB trio of De’Vante Bausby, rookie Michael Ojemudia and safety-by-trade Will Parks because they’ve lost five cornerbacks in two weeks, including starters A.J. Bouye (PED suspension) and Bryce Callahan (foot).

“I’m not at all worried because I know if we handle our business up front, then they’re going to handle their business in the back,” Chubb said.

The Bills are one of the league’s best at scoring touchdowns in the red zone and the Broncos are the stingiest defense inside the 20-yard line, allowing TDs less than half the time (48.9%).

“They’re extremely well-disciplined, extremely well-coached,” Allen said. “It’s kind of like that ‘bend, don’t break’ motto where that’s where they tighten up.”

Allen and Chubb will be forever linked because the Broncos were in the market for a QB in 2018, but quickly snared Chubb when he surprisingly fell to them at No. 5 in the draft.

Allen called Chubb a “game-wrecker” and the key to their red zone defense and Chubb said Allen is a “good dude” and a “shot taker” who’s hard to chase down, bring down and hold down.

Allen was born in 1996 about five months after the Bills last won the AFC East, which has been dominated by New England with 17 titles in the past 19 seasons, including the past 11, with Tom Brady under center.

Allen said he won’t be satisfied with just ending the divisional drought, though.