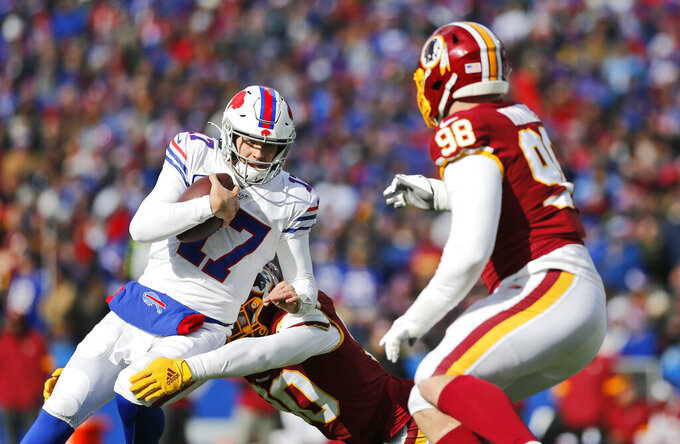 ORCHARD PARK, N.Y. (AP) — Bills coach Sean McDermott has spent the first half of the season opening most every week with a reminder about how much room there is for his team to improve, no matter if it's after a win or a loss.

Despite a 6-2 record, the Bills have closed each week proving McDermott to be correct.

One week, concerns are raised over quarterback Josh Allen's turnover troubles. The next, Buffalo's run defense is springing leaks.

And of course, there are questions of whether the Bills' best start to a season in 26 years is more a reflection of the team or a soft schedule. The six wins have come against teams with a combined 9-43 record entering Monday.

No one at Bills headquarters is apologizing for sitting tied with Baltimore with the AFC's second-best record, and a win behind New England.

Yet McDermott and GM Brandon Beane appear aware of the team's strengths and deficiencies. Neither is ready to suggest the Bills — with nine newcomers on offense and getting regular contributions from seven players with fewer than two full seasons of experience — have arrived as some sort of AFC power.

The two continue to take a patient and methodical approach to rebuilding what had been a dysfunctional and miscast team they inherited upon their arrival in 2017.

Their unwillingness to take shortcuts was evident last week when they stood pat at the trade deadline, deeming the asking prices too high. In March, Beane took a similar stand when he cut short initial trade discussions with Pittsburgh over acquiring now out-of-work receiver Antonio Brown.

McDermott has on several occasions referenced the balance that must be struck in making decisions based on both short- and long-term needs.

Though Buffalo is projected to have $24 million in salary cap space still available this season, some of that money must be kept in reserve to re-sign players, such as star cornerback Tre'Davious White. And it's a much better position than the Bills were in when their payroll was skewed by high-priced contracts handed out to underachieving players under previous regimes.

Barring a second-half meltdown, the Bills are poised to make the playoffs for the second time in three seasons. That would mark a triumphant turnaround for a franchise that opened the 2000s with a 17-year playoff drought, which stood as the longest active streak in North America's four major professional sports.

What's also true is the Bills appear miles ahead of two of their division rivals, the New York Jets and Miami Dolphins, who are 1-7 despite sharing mostly the same schedule.

And the Bills certainly don't resemble their next opponent, the talent-laden but chaotic Cleveland Browns (2-6), who appear to be crumbling under the weight of high preseason expectations.

"Very grateful to be here, No. 1, to be a part of this team," McDermott said, when asked to assess Buffalo's start. "It's a result of everyone's hard work."

Buffalo's defense has gone 12 straight games without allowing more than one touchdown passing to match the franchise's longest streak set in 1971-72 and 2009.

The run defense has allowed 556 yards and six touchdowns rushing over its past four games after giving up 338 yards and three TDs in its first four.

Gore finished with 15 yards on 11 carries for a 1.36 yards-per-attempt average that matched the seventh lowest of his 15-year career. Gore was stopped for no gain on three consecutive carries from Washington's 1 in the first half. He was held to no gain on fourth-and-1 in the third quarter, and tackled for a 3-yard loss on third-and-1 in the fourth quarter.

66: Length in yards of Andre Roberts' kickoff return, which set up Allen's 1-yard touchdown plunge. It was Buffalo's longest since C.J. Spiller's 102-yard return for a touchdown in 2014.