Buffalo to play home to Blue Jays considered a `Natural' 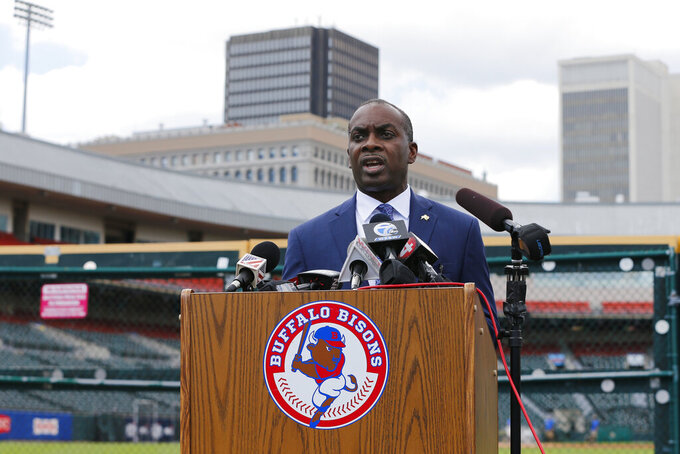 Not long after the nomadic Toronto Blue Jays announced the Triple-A city as their temporary home Friday, Michael Billoni began to wonder who could be the club's Roy Hobbs.

“Hopefully, it’s (Vladimir) Guerrero Jr. who will knock the ball on to Oak Street and win the World Series for the Jays in Buffalo,” said Billoni, the former general manager of the Triple-A Buffalo Bisons.

It took the Blue Jays nearly a week — and several coronavirus health-related rejections — to finally settle on their minor league affiliate’s park as a temporary home for this season on Friday. Although the city hasn't hosted a major league team since 1915, Buffalo's baseball roots run deep.

Hobbs, of course, is the fictional, hard-throwing ace-turned-aging-slugger made famous by Robert Redford in the 1984 movie “The Natural,” which was filmed in Buffalo at old, weathered War Memorial Stadium.

The movie is part of the city’s rich hardball history — no matter if Hobbs played for the New York Knights — that dates even beyond Buffalo’s fascination with the chicken wing.

The Bisons began as a National League team and had a 314-333 record from 1879-1885. In 1901, the then-booming Great Lakes and Erie Canal hub was a candidate to join the newly formed American League, before losing out to Boston.

The Buffalo Blues, also known as the Buffeds, had a brief run from 1914-15 as members of the Federal League.

And baseball made a resurgence in the 1980s with the construction of what’s now called Sahlen Field, the downtown stadium where the Blue Jays will roost for much of the next two months. Finished in 1988, it was built as part of Robert and Mindy Rich’s bid to land a major league franchise in a town that already featured the NFL Bills and NHL Sabres. Their hopes fizzled once Colorado and Florida were picked for expansion in the 1990s.

It took a global pandemic, and Canadian health officials denying the Blue Jays permission to play at their downtown Rogers Centre home, for Buffalo to finally re-emerge on the major league map.

“If you would have submitted this as a movie script, it would’ve been turned down because people would have said it’s not believable enough,” Bisons President Mike Buczkowski said.

“Hopefully, we’re raising a World Series championship in Buffalo,” he said. "That would be the dream. It’s just a very exciting time for our city. It’s something that we’ll be able to talk about for years and years to come.”

The stadium’s dimensions measure 325 feet down the lines and 404 feet to center and it's tight in the alleys, like Camden Yards in Baltimore.

Capacity is listed at 16,600 and it has views of a parking ramp, an interstate on-ramp and cars passing along an elevated freeway, which doesn’t make it as picturesque as Pittsburgh’s PNC Park, the Blue Jays' first choice.

Numerous upgrades are also required, with lighting needing to be improved to meet MLB standards. The bullpens are exposed along the left-and right-field lines, clubhouses will need to be expanded, plus other improvements made throughout the facility to meet safety regulations.

Blue Jays players, many of whom had stops in Buffalo, made it clear to they preferred a major league park, with outfielder Randal Grichuk describing Buffalo as a “worst case.”

With options dwindling, the Blue Jays were left with little choice except, perhaps, play the entire season on the road.

“Any time we get a chance to partake in the highest level of the sport, it’s a big day,” Bisons archivist and curator John Boutet said. “Just about none of us were alive the last time that happened. Even though fans can’t see it, it still puts Buffalo in the national eye and international eye, so it’s a fun time.”

Billoni is so excited he’s already looking forward to the playoffs.

“You can’t bet in baseball, so I’ll bet chicken wings over Labatt’s beer that they win a World Series here in Buffalo,” Billoni said. “They’ll have to do a dual flag-raising ceremony, here in Buffalo and in Toronto. I can see it now.”

Associated Press Writers Rob Gillies in Toronto, and Carolyn Thompson in Buffalo contributed to this report.