Bummed out Chiefs head into offseason full of optimism 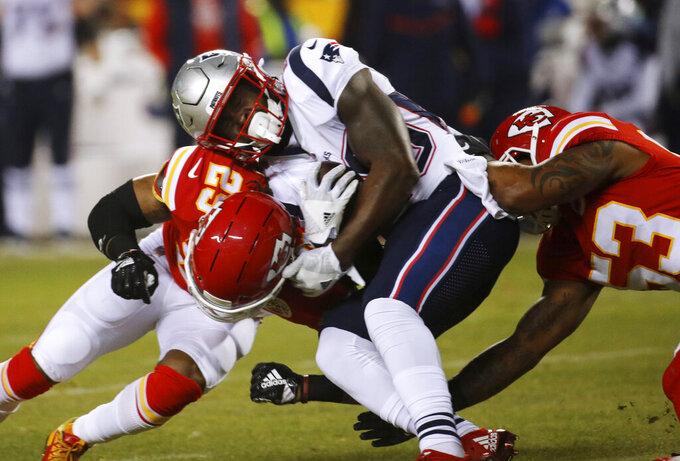 KANSAS CITY, Mo. (AP) — The Kansas City Chiefs came within a heartbeat of returning to the Super Bowl for the first time in 49 years, taking the greatest dynasty in NFL history to overtime in the AFC title game.

Instead, they are stuck with more heartache for an entire offseason.

Yet with All-Pro quarterback Patrick Mahomes under center for the foreseeable future, and a bevy of young talent around him, the Chiefs believe the foundation is set for a run of continued success not unlike what the New England Patriots have accomplished under Tom Brady.

Perhaps their loss to the Pats on Sunday night was merely the start of something special.

"Every team's going to be different year-to-year," said Mahomes, who capped his phenomenal first year as the starter with 295 yards passing and three touchdowns against the Patriots.

"We've got a lot of young guys on this team. It hurts. It hurts everybody," he said. "We knew we had opportunities in that game and throughout this season. We put in the work. We know this can be a building block. It could be something that carries us into the future."

The Chiefs will have some big decisions to make this offseason. Topping the list is whether to extend the rookie contracts of wide receiver Tyreek Hill and defensive tackle Chris Jones, and whether to sign pass rusher Dee Ford to a long-term deal or place the franchise tag on him.

They also need to upgrade a defense that struggled all season, then failed to stop the Patriots in the second half and overtime with a shot at the Super Bowl hanging in the balance.

The Patriots won the coin toss for the extra session and marched right downfield, scoring the winning touchdown and never letting Mahomes and the NFL's best offense get on the field.

Along with that comes the future of defensive coordinator Bob Sutton, who was masterful early in his tenure in Kansas City but has struggled to piece together a serviceable unit the past couple of years.

And while Chiefs coach Andy Reid has a track record of being loyal to a fault with his staff, it may be time for a new voice to take over that side of the ball.

"I never talk about that here," Reid said Monday. "I go back and look at everything."

Chiefs general manager Brett Veach will finally have a first-round pick in the draft after the club traded away last year's pick to move up in 2017 and select Mahomes — a move nobody regrets these days. He also has a pair of second-round choices from their trade of cornerback Marcus Peters.

That combined with free agency should provide ample opportunity to upgrade the roster.

All of that lies in the future, though. The feeling of disappointment was still raw Monday for a team that won its third consecutive AFC West championship, its first home playoff game in 25 years and came within a frigid breath of beating New England to win the Lamar Hunt Trophy.

"Right now it's the end," Mahomes said, "but hopefully it's the beginning of a long time."

The Chiefs are projected to have about $32 million in salary cap space, but some of that could be used to ensure Hill, Jones and Ford stay in the fold. The Chiefs are also likely to consider extending Kendall Fuller, their only reliable cornerback this season.

Defensive end Allen Bailey, wide receiver Chris Conley and center Mitch Morse — who played well when he was healthy — are also due to hit free agency, and there is an argument to be made to keep all of them. Free safety Jordan Lucas was also a bright spot late in the season, but as a restricted free agent the Chiefs should be able to hang onto him.

Chiefs safety Eric Berry only played in three games this season because of a heel issue, including the AFC title game, and could be headed for offseason surgery. He also played just one game last season before tearing his Achilles tendon. He is set to consume $16.5 million of the salary cap next season, but the Chiefs could save more than $9 million by making him a post-June 1 cut.

Justin Houston played well when he was healthy, but his salary hit of $21.1 million next season represents more than 10 percent of the Chiefs' cap space. They could get out of the deal with $7.1 million in dead money, but then again, edge rushers are hard to find.

Look for the Chiefs to target help in the secondary, whether at cornerback or safety. Or both. They could also use an upgrade at middle linebacker and another run-stuffing body on the defensive line, and depth at running back and wide receiver would be helpful.