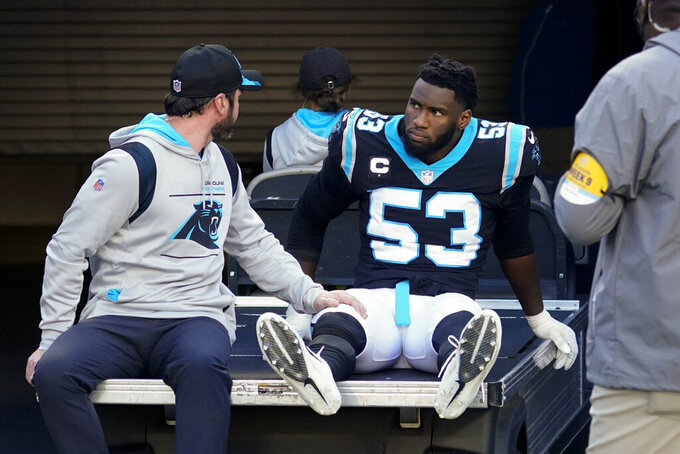 FILE - Carolina Panthers defensive end Brian Burns is taken off the field after getting hunt during the second half of an NFL football game against the New England Patriots Sunday, Nov. 7, 2021, in Charlotte, N.C. Panthers defensive end Brian Burns said he thinks Patriots quarterback Mac Jones should apologize for grabbing his foot and trying to hurt him during Sunday's game. (AP Photo/John Bazemore, File)

Not that Burns is expecting Jones to be contrite.

“It would be nice to have an apology, but it’s not going to happen,” Burns said Wednesday in his first interview since the game. “However the NFL handles it, it’s on them. I would just like to play them again.”

Then, Burns added, “I wish all my fellow D-end brothers happy hunting. That’s all.’’

Burns and several of his Carolina teammates are still upset that Jones was not penalized for holding and has not yet been fined by the league for grabbing Burns’ leg after a sack-fumble in New England’s 24-6 win over Carolina.

Burns sacked Jones from behind on the play, jarring the ball loose in the first half. As Jones was on the ground, he grabbed Burns’ lower leg, preventing the defensive end from going after the ball for a scoop-and-score. Frankie Luvu recovered the ball, but was tackled and the Panthers wound up settling for a field goal.

Burns remained on the ground after the play, but returned on the game's next series before leaving again later in the game.

“As soon as I sacked him he grabbed my arm — and my arm was trapped," Burns said. “Once I got my arm free and tried to run, obviously he grabbed my ankle. At that point I just remember going down with my ankle hurting. ... Watching the replay and then watching all the angles, I think it’s some bull. He took his legs and he swept the one leg I had up.”

Jones refused to discuss the incident on Wednesday.

“I already addressed that situation," Jones said when asked if he's reached out to Burns. "I’m just looking forward to playing in this game with the guys we have our team this week. So we’re gonna try to move forward and (be) ready to play this week.”

In his weekly appearance on WEEI-FM on Tuesday, Jones said he didn't know where the ball was after he was leveled from behind — and that he didn't mean to hurt Burns.

“I thought (Burns) had the ball,” Jones told WEEI's Lou Merloni and Christian Fauria. “It's my job to try to make a tackle. That was pretty much it.”

Replays show Burns desperately trying to free his leg from Jones' grasp, then falling to the ground.

In Burns' mind, he thinks Jones tried to twist his ankle.

“After watching the video and looking at whatever happened, and him just walking away, everything didn’t seem right about it,” Burns said. “I’m down there in pain, he just looked at me and walked off like he did his job or some bull like that. ... After seeing that, that’s when I realized, ‘Damn!’”

Panthers defensive end Haason Reddick called it a “completely dirty” play by Jones after the game and called for the league to fine the rookie QB. He also said referees should have penalized Jones for holding.

Burns said he hasn't heard anything from Jones or the Patriots.

Burns did not practice on Wednesday because of the ankle injury, but said he hopes to play on Sunday against the Arizona Cardinals. Panthers coach Matt Rhule said he will wait until later in the week to make a determination on Burns' status.